Malaysia's King has abdicated in an unprecedented move, ending weeks of speculation about his future that had heightened after a recent meeting of the country's nine state rulers.

The National Palace said yesterday that Sultan Muhammad V of Kelantan had resigned as the 15th King, or Supreme Ruler of the federation.

"His Majesty has prepared to return to Kelantan Darul Naim to be with the state government and especially the people of Kelantan to safeguard and develop Kelantan for the betterment of the public," the Comptroller of the Royal Household Wan Ahmad Dahlan Ab Aziz said in a statement issued by Istana Negara.

Malaysia's nine Malay state rulers elect a King among themselves every five years, usually on a rotational basis. But Sultan Muhammad's resignation comes just two years after he ascended to the post in December 2016. The Palace said the Kelantan monarch had informed the other rulers of his decision.

His reign ended in controversial fashion after he took a two-month break "following treatment" beginning Nov 2. It was reported during this time that the 49-year-old had married Russian beauty queen Oksana Voevodina, 25, in Moscow.

During that time, Perak Sultan Nazrin Muizzuddin Shah was Acting King until Dec 31. Just days later, the Council of Rulers held a "rare and unscheduled" meeting, and speculation spread quickly that Sultan Muhammad would step down soon.

That has now come to pass and The Straits Times understands that Sultan Nazrin will continue as Acting King before a new monarch is picked by the Council.

Prime Minister Mahathir Mohamad had written in a blog posting titled "Rule of Law" last Wednesday that all Malaysians, including the royalty, were bound by the laws of the land.

"There is no provision which exempts anyone from the rule of law. For the rulers, there is a special court, but the laws are the same as the laws applicable to ordinary citizens. The rulers too must respect the laws," he wrote. "It is disturbing to see blatant breaches of the law being perpetrated in the mistaken belief that immunity has somehow been accorded."

However, his posting did not make specific reference to any offence. While nothing bars a monarch from marrying a foreigner, ST has learnt that other rulers were uneasy with the possible coronation of Ms Voevodina. 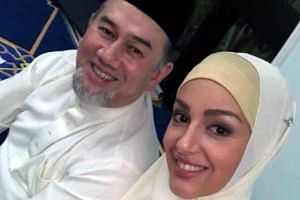 Asked about the King's status on Friday, Tun Dr Mahathir said he had not received any official information and had heard only rumours.

Sultan Muhammad was the first king without an official queen.

It was also during his reign that the Barisan Nasional's unbroken rule over Malaysia ended after last year's May 9 elections.

Although he swore in Dr Mahathir as Premier late on May 10, he had first invited Parti Keadilan Rakyat president Wan Azizah Wan Ismail to his palace earlier in the day.

He then met with leaders from Pakatan Harapan for hours, leading to speculation over whether he would refuse to install Dr Mahathir, who was the ruling coalition's agreed choice for PM.

Yesterday, former prime minister Najib Razak expressed his gratitude to the Sultan for his service, while Kelantan Menteri Besar Ahmad Yakob said the state government has accepted the Sultan's decision to resign.

Sultan Muhammad's final decree to Malaysians as King was to "continue together in maintaining unity, tolerance and join hands in bearing the responsibility for this sovereign country so that Malaysia remains peaceful and harmonious".