KUALA LUMPUR (THE STAR/ASIA NEWS NETWORK) - Malaysia's High Court on Friday (Aug 10) dismissed an application by former prime minister Najib Razak for a gag order on the media, prohibiting it from discussing the merits of the criminal cases against him.

In his decision, Justice Mohd Nazlan Mohd Ghazali said the application was unsustainable, as there are existing laws available.

"Those who overstep (in reporting) risk action being taken - such as contempt of court - and these remedies are readily available," he said.

The judge, in his assessment, said that the applicant had fallen short of establishing his case.

Najib's lead counsel Muhammad Shafee Abdullah informed the court that the defence would be filing an appeal next Monday (Aug 13) against the High Court's decision.

The defence and prosecution took an entire day in court for submissions.

Earlier, Tan Sri Muhammad Shafee submitted that the media furore surrounding his client's alleged criminal wrongdoings and the resulting public backlash had presupposed the guilt of his client. 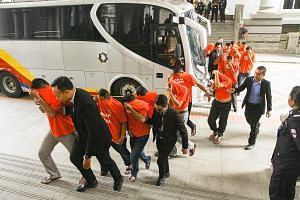 Najib pleads not guilty to fresh charges of money laundering

"It is not a dramatic observation to say that the public sentiment against the applicant is prejudiced to such an extent that nothing short of a conviction upon all charges would qualify as justice in the eyes of the public," he said, adding that the prosecution is a result of political will made manifest.

On July 4, Najib claimed trial to a charge of using his positions as the prime minister and finance minister to receive RM42 million when he was involved in the government's decision to provide a guarantee for a RM4 billion loan from Retirement Fund Inc to SRC International.

He also claimed trial to three counts of criminal breach of trust under Section 409 of the Penal Code.

The High Court fixed Feb 12 to Feb 28 and March 4 to March 29, 2019, for Najib's trial for criminal breach of trust, abuse of power and money-laundering cases.