Najib was granted bail of RM3.5 million with two sureties in his latest court case after he was slapped with 25 graft and money-laundering charges involving RM2.3 billion.

Najib's lawyer Muhammad Shafee Abdullah requested that the bail be paid in staggered payments, with RM1 million to be paid on Friday and another RM500,000 next week.

Najib was hit with 25 charges of graft and money laundering relating to transactions linked to 1Malaysia Development Bhd (1MDB).

The 64-year-old pleaded not guilty to four charges of graft which allegedly occurred at the AmIslamic Bank branch on Jalan Raja Chulan while in his position as a civil servant, namely as prime minister, finance minister and adviser emeritus of 1MDB.

The first charge said the bribe was an inducement for Najib to get the Cabinet's agreement for the Malaysian government to give a sovereign guarantee to the Terengganu Investment Authority (TIA), thus allowing the company to receive a loan of up to RM5 billion from the domestic and international markets via an Islamic Medium Term Notes Programme. 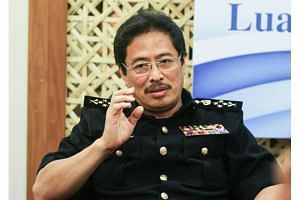 It stated that he also used his position as prime minister in 2009 to have the federal government take over TIA and subsequently rename it 1MDB, where he had a direct interest in the company.

The Sessions Court was told on Thursday that the former premier has a "propensity" to interfere in cases and should not be allowed bail.

Former federal court judge Gopal Sri Ram, who is appointed by the Attorney General Chambers to lead the prosecution, said this while making his case in objecting to bail for Najib.

"This is a case where the accused had betrayed the trust and confidence of the public. The Attorney General of the United States described this case as 'the worst kleptocracy'.

"This is a case of theft, unparalleled," he said here yesterday.