A highly placed source in the Malaysian Anti-Corruption Commission (MACC) said other BNM officials were also questioned regarding the acquisition of the 22.57ha land known as Lot 41.

It has been learnt that Tan Sri Muhammad has been questioned several times.

"We have recorded his statement and also from many other officers of BNM. What the MACC covers is mainly about the land sale," the source said.

The source also indicated that MACC was looking into the money trail of the RM2 billion, while it has left it to BNM to investigate whether it was a clean deal.

"If BNM wants to investigate its own officers, that is its own internal investigation. We will not interfere," the source said.

Asked whether senior bank officers or high-ranking officials were called in, the source replied: "Many people."

A highly placed source in the Malaysian Anti-Corruption Commission said other BNM officials were also questioned regarding the acquisition of the 22.57ha land known as Lot 41.

On Oct 31, Prime Minister Mahathir Mohamad said someone in the central bank "obviously knew" what had happened to the proceeds of the land sale.

BNM issued a statement on the same day, saying it had commissioned an independent party to review the processes and come up with its findings.

This was after news broke that four officers were told to go on leave pending the central bank's internal probe. The BNM statement said the officers "opted to take leave of absence".

It has been learnt that the four officers included an assistant governor said to have been recently promoted to the post. 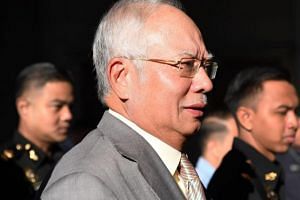 The controversy erupted after BNM made an announcement on Jan 4 about the land acquisition for the development of a financial education hub.

Questions were raised about the purchase price, as the central bank was deemed to have overpaid.

Since an institution of learning is to be built on the site, the land price should have been lower than RM2 billion as the land is not being used for commercial purposes.

Hartanah Mampan, a special purpose vehicle of the Finance Ministry, sold the land to BNM.

Mr Muhammad stepped down in June, supposedly due to the controversy.