KUALA LUMPUR (THE STAR/ASIA NEWS NETWORK) - Malaysia's Economic Affairs Minister Azmin Ali has confirmed that he did not meet officials from Singapore's Ministry of Transport (MOT) over the weekend.

"They (Singapore media) are right. When I spoke to you yesterday, did I say I was meeting with MOT officials?" he told reporters at the Parliament lobby on Tuesday (Aug 7).

Datuk Seri Azmin added that he did have a meeting in Singapore over the weekend, but when asked who it was with, he simply said "a Singaporean".

On Monday, Mr Azmin told Parliament reporters that he had an informal meeting with some senior officials in Singapore over the High Speed Rail (HSR) project last weekend, while visiting Home Minister Muhyiddin Yassin who was undergoing treatment there.

"I took that opportunity to meet some senior officials in Singapore to discuss the HSR project, but I will issue a statement to that effect at some point. The meeting was very positive," Mr Azmin had said.

But a spokesman for Singapore's Ministry of Transport said no meeting had been scheduled or had taken place between Mr Azmin and the Singapore officials overseeing the HSR project.

The spokesman added that Singapore had, since June 1, asked Malaysia for a written response clarifying its position on the project. 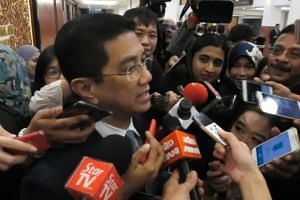 Mr Azmin, asked on Monday when he would have a formal meeting with Singapore over the HSR, said a date has already been fixed and he will be in touch with his Singaporean counterparts soon.

"The date has been fixed and I will be in Singapore soon. I will present our case as mandated by the Cabinet, it's only fair for them to have the opportunity to hear me out in an official meeting. All options will be discussed, what's important is that the whole process is fair and transparent," he said.