KUALA LUMPUR - The number of deaths from Covid-19 reported on a daily basis in Malaysia has been high in recent weeks because the figure includes backlog cases, according to the health authorities.

The health ministry, for instance, reported 463 deaths as at Tuesday (Sept 14), but said that only three of these occurred on that day. The remainder, it said on Wednesday, had taken place earlier but were reported late due to the backlog.

Public concern was sparked when the country reported 592 deaths on Saturday, the fifth-highest daily toll in the world, but the ministry later clarified that the actual number of deaths on the day was 100.

Last week, on Sept 9, the ministry launched CovidNow, an online platform which includes daily data based on time of death, instead of when fatalities are confirmed, which was what had apparently caused the backlog and drove up the daily numbers.

Data from the portal shows actual daily deaths, based on a seven-day average, was 104 as at Tuesday, down from 128 recorded the previous day and the figure has been declining since Sept 1, when it stood at 233. The portal was set up to provide transparency and at least one expert has said that efforts should be made to reduce the backlog.

"Due to the large number of deaths each day, it is inevitable that there is a backlog. However, the ministry must reduce it to an acceptable level as the current backlog can go back several weeks," Mr Azrul Mohd Khalib, chief executive officer of the Galen Centre for Health And Social Policy told The Straits Times.

The declining death rates come as more people are vaccinated. Over 75 per cent of the adult population have been fully vaccinated. Meanwhile the country's intensive care unit bed utilisation also registered improvement, at 81.7 per cent on Tuesday, compared with 84.8 per cent on Monday.

Nevertheless, the fact that past cases are being reported only now also means that the actual death toll was higher than stated in official figures for previous months. Taking Aug 1 as an example, the number of daily reported deaths was 160, but the ministry's updated figures show that it was 295.

Computer engineer Azhan Nazir told ST: "I'm glad the number is supposedly declining but since it's being updated in real time, it also highlights that the real extent of the damage is only being reflected now.

"I thought what we've been seeing is already bad, but this is even worse - there were even more deaths that weren't reported. It's frightening."

Meanwhile the distinction between actual daily deaths and backlogged cases is of little comfort to people like Ms Aidah Zahir, who lost four family members to Covid-19 in April.

"I'm still trying very hard to process my loss, and seeing the number of people dying every day makes it even harder for me," the 29-year-old civil servant told ST.

"What's going on, Malaysia? How did we get here so fast, so sudden? I cannot imagine another person going through the exact same thing as me," she said. 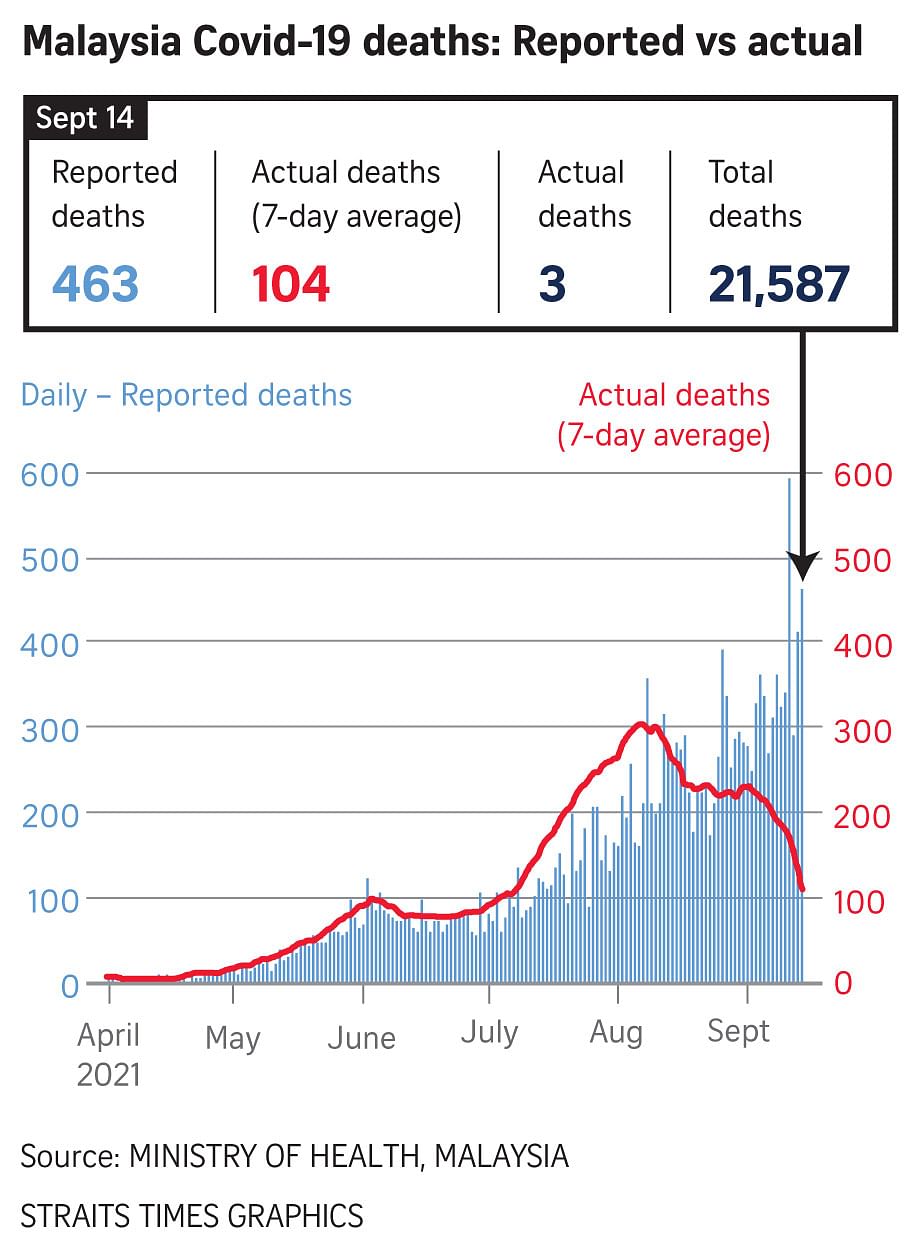