The administration of Prime Minister Najib Razak regularly boasts of reducing poverty and increasing per capita income, and yet Malaysians complain even more often about the increasing difficulty of making ends meet. Whether it is a perception problem or not, ministers are acknowledging that this is the key concern for an election due in 15 months. The Straits Times' Malaysia Bureau delves into this prickly issue.

Malaysians worry about cost of living amid slowing economy

Before every major festival, Malaysia announces a list of goods - such as turkey for Christmas and pork for Chinese New Year - under price control.

But for the ongoing Ramadan fasting month, government enforcers went on an unprecedented 10-day raid of 11,895 business premises, issuing fines to errant traders for overpricing 10 items ranging from coconuts to mung beans.

With the general election due in 15 months and complaints over rising costs getting louder, the enforcement by the governing Barisan Nasional (BN) coalition is timely.

Worryingly for BN, which has ruled South-east Asia's third biggest economy since independence in 1957, inflation hit an eight-year high in January and kept climbing up to March. Many blame the 6 per cent goods and services tax (GST) introduced in 2015 for rising prices, and a weaker ringgit for pushing up the costs of imports.

International Trade and Industry Minister Mustapa Mohamed, the longest-serving Cabinet member in the Najib Razak administration bar the premier himself, said in a Bloomberg interview recently that the cost of living was the primary concern for voters.

"People are worried that the dollar is not stretching as far as it used to. People remain unhappy about GST," he said.

Malaysia's top pollster, Merdeka Centre, also found that economic concerns were foremost on the minds of 74 per cent of voters, far ahead of well-documented ethnic and political discord, at 3 per cent and 2 per cent respectively. 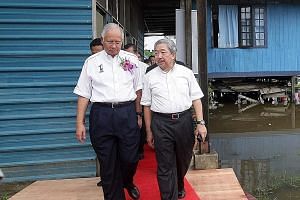 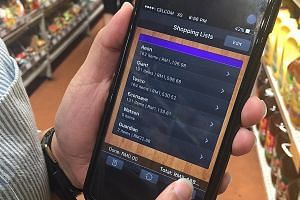 The middle class is feeling the pinch as well

Its survey results from March, which were shared with The Straits Times, also showed that inflation was the most important issue for six out of 10 Malaysians, and for more than three-quarters of Muslims, who make up two-thirds of the electorate.

"The biggest factor is the worsening economy, which includes rising cost of living, and dwindling opportunities and employment. But as election day draws near, the poor will be showered with goodies, and will be counted on to deliver for BN," S. Rajaratnam School of International Studies senior fellow Oh Ei Sun told The Straits Times.

The government insists that it has contained inflation. Since Prime Minister Najib took power in 2009, annual inflation has crept over 3 per cent only twice.

Ms Hanisah Shaari, a mother of seven, makes just RM500 (S$161) a month on her own, selling chicken chop at a stall in a quiet Kuala Lumpur street across from her low-cost flat, where she has stopped paying her RM124 monthly rental.

"I have no plans. I have tried to think of ways to resolve this money issue but it just results in a headache," she said.

"We have done a lot of work to ease the people's burden related to the rising cost of living," said the Prime Minister, listing efforts such as price control, assistance for housing and entrepreneurs and, of course, the cash aid scheme 1Malaysia People's Aid or BR1M.

Since BR1M started in 2012, almost RM19 billion has been disbursed.

But his assertion based on the EIU data has been challenged by unionists. The Malaysian Trades Union Congress' Sarawak secretary Andrew Lo noted that the EIU study was intended for expatriates and business travellers, who measure cost in US dollars.

The Malaysian currency lost a third of its value against the greenback from 2013 to last year, although it has recovered slightly in recent months. The ringgit is also down by 23 per cent against the Singapore dollar in the past four years.