JOHOR BARU (THE STAR/ASIA NEWS NETWORK) - Malaysians driving to Singapore on a daily basis have to deal with yet another charge - a Reciprocal Road Charge (RRC) that the republic claims it's imposing to match the RM20 (S$6.40) fee Malaysia is levying on their cars.

Although the RRC is only S$6.40 (RM20), this comes on top of the other fees - the Vehicle Entry Permit (VEP) and the toll charges - that Malaysians already have to fork out to cross over to the city state.

Parents who send their children to school across the border are especially upset and concerned that school van operators might use the RRC as an excuse to increase the already high fares.

Ms Ivy Teh, 48, whose two children study in Singapore primary schools, said the fare had risen to RM750 per child, compared with RM350 six years ago.

The amount, she added, had been steadily rising over the years due to the fuel hike. Now, she is worried that the RRC would cause the fare to go up again. 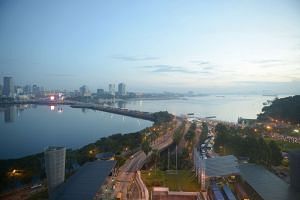 We are not discriminating against Singaporean cars, says Malaysian Transport Minister in response to new road charge

"I have suggested to the van operator to give it at least six months or so to see if the S$6.40 RRC really causes any impact to her business before imposing another price increase," she said in an interview here on Monday (Jan 16).

Housewife Choong Swee Lan, 50, said it would be a huge burden if the fare is raised again as she is currently paying RM1,400 just to send her two children to school across the Causeway.

"We are already paying so much to give our children better quality education.

"With the schools in Singapore revising the fees by 10 per cent yearly and the high cost of living here, we might stop sending our kids there," she said.

Another motorist, wishing to be known only as Jack, 36, said it is tough for people like him who drive to Singapore frequently to meet with his business partner who runs a workshop in Jurong.

"The timing is poor as our country's economic slowdown is already taking a toll on the people.

"I have no choice but to drive as it is hard for me to attend meetings on time if I take public transport," he said.

Contractor Idzwan Idzhar Marappan, 27, who goes shopping and dining in Singapore with his friends and family every week, said he might start carpooling with others to save cost.

"As if the existing charges such as the VEP and tolls are not enough, now we have to fork out an extra S$6.40," he sighed.

Sales manager Shareen Kaur, 30, who commutes to Singapore for work daily, said she would rather wake up much earlier to travel by public transport than pay more for the RRC.

"On some days I would drive into Singapore but with the collection of RRC next month, I won't mind braving the crowd to take public transport," she said.

But businessman Haziq Hakim, 30, who enters Singapore twice a week with his parents, said he will never make his aged parents take public transport.

It takes public transport commuters between 45 minutes and an hour, including time spent queueing at the immigration counters, to cross to Singapore. And they will need to wake up earlier, with some catching the buses at 3am or 4am.

For driving, it's a breeze if traffic is smooth, as it takes only 10 to 15 minutes to cross over. But if there's congestion, the journey can last up to two hours. More cars are seen during the weekends.