AMPANG JAYA, MALAYSIA - A student in Malaysia died after a barbell fell on him while he was training in a gym.

Mr Wang Zongren, 20, was lifting a 108kg barbell when it fell on his neck, causing his death. A friend who was in the same gym suspected that Mr Wang was trying to push his body to the limit when he lost control of the barbell due to fatigue, causing it to slip from his hands and crush his neck.

The freak accident happened in a fitness centre at Ampang Jaya in Selangor at about 8pm on Tuesday (Oct 3). Mr Wang was a fitness enthusiast who studied in the Malaysian Institute of Art. He was also a part-time real estate agent, Malaysia's China Press reported.

His friend said that there were five people, including Mr Wang, at the gym during the accident. Three of them were in the prayer room, while he went out to have a smoke.

"I asked him to wait for me before I left. However, when I returned, he was unconscious and the barbell was on his neck," his friend said.

He sought help from the other three friends immediately. They moved the barbell away together and called the hospital for help.

Mr Wang was pronounced dead after the medics arrived and his body was sent to hospital later for autospy.

According to China Press, Mr Wang used to weigh about 100kg but his weight dropped to about 80kg after he went to the gym regularly. His friend disclosed that Mr Wang went to the gym five days per week, with each session lasting at least two hours. 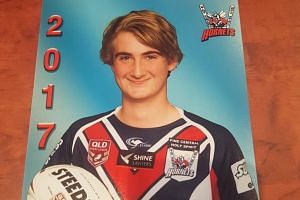 Aussie teen dies after being crushed by weightlifting equipment in gym

His friend said that during the incident, Mr Wang was bench pressing a barbell weighing 108kg. The dumbbell on each side weighed 45kg each, while the bar itself weighed 18kg.

He said that under general conditions, a person trying to push the limit should have people beside him to provide support, so that they can help him to support the barbell or other fitness equipments if he is too exhausted to carry on.

He said that Mr Wang has several years of fitness experience, so it was unlikely that his death was caused by the wrong use of equipment.

"It is likely that the barbell slipped from his hands as he was too tired to carry on," he said.

Mr Wang's family have arrived in Ampang Jaya to claim his body and his body has been sent to his hometown in Batu Pahat, Johor, to be cremated on Friday, said China Press.

On Sept 26, a 15-year-old Australian teenager died after he was crushed in a weightlifting accident.

The teen had been attempting to bench press about 100kg in a Brisbane gym.