IPOH (THE STAR/ASIA NEWS NETWORK) - No information has surfaced in the effort to track the whereabouts of the family of the two-year-old boy left to die by the side of the road in Ampang.

The police received three calls to condemn the family's act or to express sympathy, but it was still unable to determine the identity of the boy or his home address, a spokesman said.

"The calls were either to express concern or to condemn his parents.

"We also have one e-mail from Singapore, asking about the condition of the boy and expressing sympathy," said the spokesman here on Friday (Aug 19).

It was earlier reported that the boy, who suffered a brain haemorrhage, had been left in a box in Jalan Ampang on July 30 at about 1.30pm. 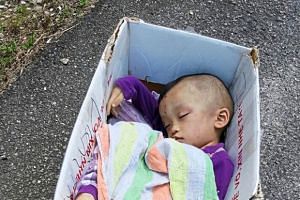 Toddler with brain haemorrhage, left by roadside in Ipoh, now recovering in hospital

A passer-by sent him to the Raja Permaisuri Bainun Hospital, where he has now regained consciousness and is able to breathe on his own.

The spokesman said police suspected that the boy was a victim of child abuse and urged witnesses to come forward with information.

When contacted, state Welfare Department director Rosmawati Ishak said she was unaware of the case.

Expressing her sadness over the matter, Perak Women For Women Society president Mable Wong said leaving the boy by the roadside was cruel and an act of wanton abuse.