He said police are working with the Malaysian Communication and Multimedia Commission (MCMC) to track down those responsible for the posts.

To date, no arrest has been made.

The Royal Family had earlier described the online reports as "malicious and untrue".

They were upset that irresponsible parties were spreading baseless tales about their personal lives.

In a statement, Tunku Tun Aminah voiced her displeasure at such rumours about her marriage with Dennis Muhammad Abdullah, as well as alleged business dealings with skincare and slimming products. 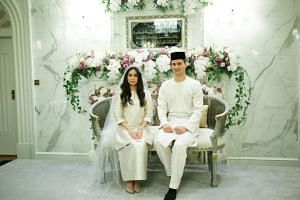 "My husband and I are happy, contrary to what the rumours say."

"I have also not endorsed any product as written by these unscrupulous people, who are out to use my name in order to get attention," she said, adding that complaints lodged with Facebook were not acted on promptly.

The Johor royal family hoped the social networking service company would remove the malicious content, in line with its pledge to ensure fake news be dealt with sternly.

The wedding at Istana Besar was attended by local and foreign dignitaries such as the Sultan of Brunei and the new Malaysian king Sultan Abdullah Ri'ayatuddin Al-Mustafa Billah Shah.