Unrepentant Malaysian terrorist Yazid Sufaat is set to be freed from prison next month.

Malaysia's national police chief yesterday confirmed a report in The Straits Times last Saturday that the 55-year-old US-trained biochemist, who once attempted to produce weapons of mass destruction for Al-Qaeda, would be released from Simpang Renggam Prison, where he has spent two years in detention, the maximum allowed under the Prevention of Terrorism Act (Pota).

"He has served his sentence, and only if he commits an offence after his release, will the police take action," Tan Sri Abdul Hamid Bador told reporters after the 69 Commando Golden Jubilee at the General Operations Force base in Ulu Kinta, Ipoh.

"Just to detain him based on people's perception, we (the police) will not do that. (But) we understand people's concerns that he has the capability and was deeply involved in terrorism activities," he said.

Mr Abdul Hamid said the police will not challenge the release.

In the 1990s, Yazid attempted to cultivate and load anthrax onto weapons in Afghanistan.

His home in Kuala Lumpur had also been used by senior Al-Qaeda members for meetings. At one meeting, plans to crash planes in the United States on Sept 11, 2001 were discussed. He is the only Malaysian with direct links to the attacks.

Despite spending almost two decades in detention and undergoing an extensive deradicalisation programme, Yazid has been described by Malaysian police counter-terrorism chief Ayob Khan Mydin Pitchay as "the most challenging militant" for the authorities to rehabilitate so far.

The final decision on his release will be made by the Prevention of Terrorism Board. An official with the Home Ministry told The Straits Times the board has not convened to discuss the matter.

Despite spending almost two decades in detention and undergoing an extensive deradicalisation programme, Yazid Sufaat has been described by Malaysian police counter-terrorism chief Ayob Khan Mydin Pitchay as "the most challenging militant" for the authorities to rehabilitate so far.

"We believe this is the police's recommendation (to release Yazid). We will wait for the Malaysia Prison Department to share its input with us before we make a decision," the source said.

The board, the source added, would need recommendations from both the police and Prison Department before arriving at a decision.

"The Prison Department will need to share its assessment of Yazid, like a report card, with the board. If they believe that Yazid has still not been fully deradicalised, then there's a possibility the detention order will be extended," the source said.

Yazid, a former army captain, was first arrested in 2002 under the Internal Security Act (ISA), which allowed for indefinite detention without trial.

He was released in 2008, after undergoing rehabilitation and showing signs of "remorse" and "repentance".

He was detained for a second time, in 2013, under the Security Offences (Special Measures) Act - the legislation that replaced the ISA - for recruiting new members for the Islamic State in Iraq and Syria. 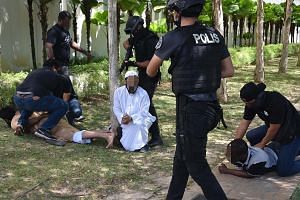 This led to a four-year jail sentence in Perak's Tapah prison.

In December 2017, Yazid was re-arrested under Pota after the authorities found he had been recruiting fellow inmates for Al-Qaeda while in jail.

The militant also acquired 4 tonnes of ammonium nitrate in 2000 in preparation for a bombing plot in Singapore, which was foiled.

Yazid also held weekly religious classes in 2012 at his house in Ampang, Selangor, where he recruited several individuals.

The Kuala Lumpur High Court heard in 2015 that he had undergone military training in Afghanistan, met Osama bin Laden and taken part in conflict or what the militants dubbed as "jihad".