KUALA LUMPUR - Malaysian police confirmed on Monday (July 4) that a grenade blast which wounded eight people at a nightclub in Puchong, Selangor last week was the first successful ISIS attack on Malaysian soil.

Police said they believed that there were Islamic State in Iraq and Syria (ISIS) elements that were behind the grenade blast at the Movida nightclub in Puchong, a town outside Kuala Lumpur, last Tuesday, The Star reported. Eight people, including a woman from China, were injured in the blast.

Inspector-General of Police Tan Sri Khalid Abu Bakar said the attack was carried out by locals who were directly instructed by ISIS member Muhamad Wanndy Mohamad Jedi from Syria.

Police said they have arrested 15 people as part of a counter-terrorism crackdown following the attack, including the two men believed to have carried out the blast.

“The two of those arrested had received instructions from Muhamad Wanndy, who had commanded them to carry out attacks in Malaysia, on our government leaders, top police officials and judges. These three groups are considered as threatening to (ISIS) activities,” Khalid said at a news conference, according to Reuters.

Khalid said those detained during the crackdown had all received instructions to carry out attacks on top officials “and also entertainment centres, which they consider un-Islamic”.

Seven of the men were arrested in Kedah, four in Selangor, two in Kuala Lumpur and one each in Malacca and Penang, the New Straits Times (NST) reported, and all were aged between 19 and 52. 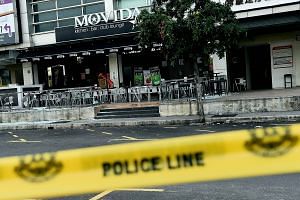 It was confirmed that two of the 15 were also policemen.

Khalid said the main perpetrators of the attack were arrested in Port Klang on July 1 and the suspects had worked in a factory there, the NST reported. Police believe the mini grenade used was smuggled in from a neighbouring country and police had also seized multiple sharp weapons, balaclavas, as well as ISIS flags and ideology materials during their operation.

All those detained, including the two linked directly to the attack, are Malaysians.

The attack on June 28 occurred in the early hours of the morning as patrons were at the Movida nightclub to watch a Euro 2016 match.

The police had previously ruled out terrorism as the motive for the attack, saying a more likely motive appeared to be business rivalry, or a targeted attack on someone in the bar.

But doubts were raised over the motive after a Facebook page linked to the militant group claimed responsibility for the attack.

Reuters previously reported that counter-terrorism officials were trying to establish the credibility of the claim, which was posted on the Facebook page of Muhammad Wanndy a known Malaysian ISIS fighter. Muhammad Wanndy had claimed on his Facebook page that the attack had been carried out by two followers of ISIS.

The ISIS recently released a video of its fighters from South-east Asia calling on its supporters to stay home and unify under one umbrella group to launch attacks in the region.

Four suspected militants were arrested in January, and in April last year 17 people were arrested on suspicion of plotting terror attacks in Kuala Lumpur.