KUALA LUMPUR (REUTERS) - Malaysian Prime Minister Najib Razak said he had done nothing wrong in receiving hundreds of millions of dollars into his personal bank accounts, as his party opened its annual meeting on Tuesday (Dec 8) amid tensions over a festering funding scandal.

Mr Najib has so far weathered calls for him to quit over allegations of graft at state fund 1Malaysia Development Berhad (1MDB) and his receipt of RM$2.6 billion (S$855.5 million) in what he says was a political donation.

But pressure is mounting on Mr Najib as the saga causes a rift between top leaders in his Umno party which has ruled the country for 58 years, but looks increasingly at risk of losing the next election.

In his most detailed explanation since the scandal erupted in July, Mr Najib said his conscience was "absolutely clear" and the truth would come out when investigations were completed. 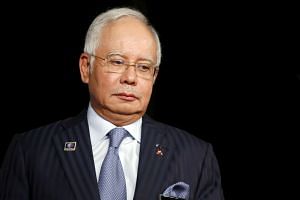 The Malaysian Anti-Corruption Commission (MACC) questioned Mr Najib over the deposits at the weekend and the commission also said on Monday that it had interviewed the unidentified donor in the Middle East.

"Firstly, the 2.6 billion ringgit is neither public funds nor 1MDB's money. This was confirmed by the MACC," Mr Najib said in an interview with state television TV3.

Malaysia's Central Bank was aware of the accounts'existence, he said, adding that the donor did not see it as a bribe and expected nothing in return.

"It's a donation, a gift. A donation is not illegal under any legal provision," he said.

The Wall Street Journal had reported in July that the funds had been discovered in Mr Najib's accounts by investigators probing accusations of financial irregularities at 1MDB. Mr Najib, who chairs 1MDB's advisory board, has denied the money came from the fund, which is being investigated by several foreign agencies, including the FBI.

The scandals have shaken investors in South-east Asia's third-biggest economy and rocked public confidence in the coalition led by Mr Najib's Umno party, which has held power since independence in 1957. Backing for the government among the ethnic Malay majority that forms the bedrock of Umno's support sank to 31 per cent in October, from 52 per cent in January, according to the most recent poll from research firm Merdeka Center. 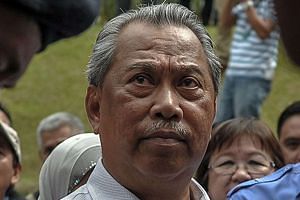 In a speech to his supporters on Monday night, Umno's Deputy President Muhyiddin Yassin called on the prime minister to step aside until the investigations were completed.

"I would like to suggest that the prime minister take a rest for now," he said. "Allow the investigations to proceed freely, transparently and fairly... go on leave until the case is over."

Mr Muhyiddin, who has led calls for Mr Najib to give a fuller explanation of the IMDB affair, was ousted as deputy prime minister earlier this year.

In a break from tradition, he will not speak at Umno's annual assembly. 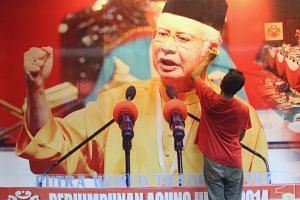 The uncertainty created has hit an economy already reeling from falling oil and gas prices, with the ringgit losing nearly a quarter of its value against the dollar this year.

Mr Najib, 62, still enjoys the backing of most of Umno's powerful division chiefs, and even his fiercest internal critics accept that he cannot be unseated. Analysts say there is no obvious contender to replace the embattled leader, and Mr Najib has proved adept at playing the networks of patronage that underpin Umno.

The opposition is also weak without charismatic leader Anwar Ibrahim, who was jailed on charges of sodomy in February, a verdict his supporters say was politically motivated.

Among Mr Najib's most potent critics has been influential former prime minister Mahathir Mohamad, who has said Umno will lose the next election in 2018 if Mr Najib remains in charge.

As the party gathered for its annual meeting, Mr Najib responded to his critics with an appeal for unity. "I want the party to remain united," he said in the TV3 interview.

"I do not want to see the party in chaos or divided...I want party members to close ranks."