KUALA LUMPUR - Malaysian Prime Minister Najib Razak has clarified that he eats rice too, after being mocked by opposition politicians for saying he had switched to quinoa, a healthier and more expensive grain than the Asian staple.

The Prime Minister's Office in a Facebook post on Friday (Feb 23) explained that Datuk Seri Najib ate the Peruvian food as part of his healthy diet regime and on his doctor's advice. It also clarified that the premier "attends many events every week and is served various types of food including rice at those functions."

Opposition leaders were quick to imply Mr Najib was out of touch with the average Malaysian after the premier talked about his preference for quinoa in a television interview aired on Thursday (Feb 22).

He added, according to news site Malaysiakini, that "quinoa which Najib eats is about 23 times more expensive than rice, eaten by 30 million Malaysians."

Mr Najib had said he was introduced to the Peruvian grain by his son.

Netizens also shared Instagram posts from 2014 by Mr Najib's son Ashman Najib, including one that said: "So ecstatic that our brand of quinoa is finally on the shelves!!" There was an accompanying picture of a brand of the product on a supermarket shelf. 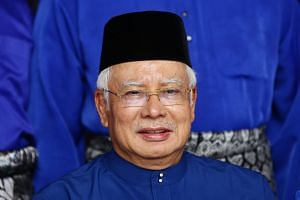 There are at least two other Instragram posts by Mr Ashman showing his interest in the high-protein, gluten-free food imported from Peru.

The issue recalled a 2014 controversy in which Mr Najib said people who complained about the rising cost of living did not credit the government when food prices fell, giving the example of the humble kangkung or water spinach.

Memes ridiculing him over the kangkung comments sprang up quickly and were widely disseminated by government critics.

In the quinoa debacle, the premier said in the TV interview he could not exercise as frequently as he wanted, so he watched his diet.

"But I have to control (my eating). For example, I don't eat rice, but quinoa. My son introduced me to quinoa, a food from Peru.

"It is protein-based, so it has less carbohydrates and less sugar content, so it is better than rice," Mr Najib said in a live TV session discussing the 2018 Budget and how it helped the average Malaysian household.

The comments were made amid widespread complaints from Malaysians over the rising cost of goods in the country and difficulty in making ends meet.

In the programme, Mr Najib told Malaysians to live within their means if they want to improve the quality of their lives.

Mr Lim, a leader of opposition Democratic Action Party, told a news conference in Penang on Friday: "I had never heard of quinoa - in fact, I did not even know that quinoa existed.

"I had to ask around whether anyone knew anything about quinoa," he said, as quoted by Malaysiakini news site.

"The 14th general election will be quinoa versus rice, clean government versus kleptocracy, and Najib versus the people of Malaysia," he said.