But the Premier reiterates he will hand over power to Anwar

KUALA LUMPUR • Malaysia's Prime Minister Mahathir Mohamad reiterated yesterday that he will pass the premiership to Datuk Seri Anwar Ibrahim, amid news that leaders from three opposition groups had met the 94-year-old leader to ask him to serve out his full five-year term as prime minister.

When asked yesterday about the Tuesday evening meeting, he told reporters: "Unless they push me to the corner and put a gun on my head to continue until the term is finished, unless you do that, I will step down. I will keep my promise."

He added: "I have given my undertaking, I will step down when I find that the situation in the country has been put on an even (keel)... maybe two years, three years. I don't know, we are working on that."

Tun Dr Mahathir confirmed that he met the opposition leaders, saying they wanted to meet him.

"They came to see me, so I met them. I heard what they wanted to say," he told reporters. "A lot of them expressed support for me. Thank you very much."

The meeting was unusual even in Malaysia's tumultuous politics with its shifting allegiances, as it was the opposition leaders and not those from his Pakatan Harapan (PH) coalition who are pushing him to complete his full term.

In proposing that Dr Mahathir stays on as premier, PAS president Abdul Hadi Awang said earlier this week: "The prime ministership is not like wearing shoes, where you can replace them. Let it be until the situation is stable."

Malaysian PM may benefit most from rift within PKR

The meeting came about amid a bitter spat between PKR president Anwar and the party's deputy president Azmin Ali after the emergence of an explosive gay sex video purportedly showing the latter.

While Dr Mahathir and PH leaders have generally agreed that Mr Anwar, 71, will become the eighth prime minister, there is suspicion among his supporters in PKR that Dr Mahathir would instead prefer to pick Datuk Seri Azmin, 54, who is also Economic Affairs Minister.

A person who attended the meeting told The Star: "Like it or not, Umno and PAS are still the biggest political parties in the country, although they are the opposition. The main agenda (of the meeting) was for Umno, PAS and GPS to state their support for the Prime Minister to stay on for a whole full term, and that they do not want Anwar to take over, be it after two years or three years - not to change horses in midstream."

GPS consists of four Sarawak parties that were formerly with the Barisan Nasional coalition. It controls the Sarawak state assembly.

"What happened was that there was an invitation by the Prime Minister (to GPS) and to the other parties. They just wanted to have a chit-chat, that is all," said Datuk Patinggi Abang Johari. 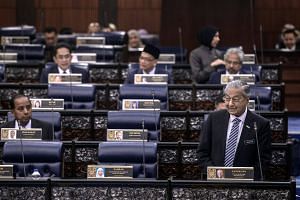 Malaysia's Cabinet reshuffle on the cards? It depends on timing of Mahathir's party polls

Umno, PAS and GPS together control 74 constituencies in the 222-seat federal Parliament, according to figures shown on Parliament's official website.

PH also has backing from 10 seats controlled by its allies in Sabah - Parti Warisan Sabah and Upko.

"The team and the Prime Minister agreed that this would be a measure taken for the good of the country, beyond political parties, to ensure that the people do not suffer from a political crisis midway if Dr Mahathir is made to step down before he is able to carry out his plans," said the source.

A second source told The Star that the Tuesday meeting was the first time these leaders had come together, to show one another that they are all on the same page.

The person said the team wanted to convey to the Prime Minister that he could continue his work without interruption and not worry about stepping down midway. "They want him to know they have his back," said the source.