PETALING JAYA (THE STAR/ASIA NEWS NETWORK) - The Malaysian official who confessed that he was featured in a widely circulated gay sex video that involved a man resembling Economic Affairs Minister Azmin Ali had at first denied he was in the video. He also switched alliances several times as he pursued a career in politics.

A close friend of Mr Muhammad Haziq Abdul Aziz, a private secretary of Deputy Primary Industries and Commodities Minister Shamsul Iskandar Mohd Akin, texted him after the sex video emerged, and Mr Haziq denied it was him.

"He said I was crazy to think he was gay and denied it was him," said Mr Habib Mazlan, speaking about his text exchanges with Mr Haziq on Monday (June 10).

Screenshots of the WhatsApp exchanges showed Mr Haziq, 27, saying: "I have seen the video - it is not me. Don't slander! I am not relevant. I am just a victim of the situation."

However, Mr Haziq on Wednesday confessed on Facebook that he was the man in the sex video and named a minister as the other person in the clip.

Mr Habib said Mr Haziq had shown interest in politics and was disappointed after he failed to get an appointment as a PKR (Parti Keadilan Rakyat) Youth Executive Council member when the leader he supported did not win the Youth chief post in 2015.

"Haziq then travelled to the United States for six months as an exchange student. When he returned, he went back to continue his studies in Universiti Malaya (UM). 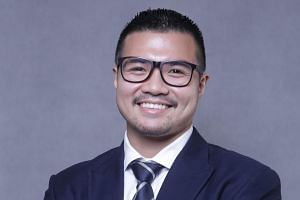 Anwar in first comments on sex video says he has spoken to Azmin, rejects 'gutter politics'

"I then found out he was with Parti Pesaka Bumiputra Bersatu and intended to stand for the Sarawak state elections," said Mr Habib.

"I was really surprised when, at another time, he said he was an aide of a Pakatan Harapan minister."

Two family friends of Mr Haziq, who had known him for more than a decade, said Mr Haziq was in a steady relationship with a woman for years.

"He and his girlfriend were together for quite a while, but I heard they recently broke up," said one of the friends.

A schoolmate who studied with Mr Haziq at the all-boys school Sekolah Sains Alam Shah in Cheras said he was active in the school's Islamic student body there.

"He comes from a very kind and respectable family in Kuching. He is very close to his family. When I first met him, he was a strong supporter of Umno and all we did was talk politics.

"Then, he became a Pakatan supporter. A few years later, he was following a Sarawak Barisan Nasional minister here and there, and I assumed he was for Barisan again.

"Then, suddenly I was shocked when he was appointed the private secretary to Shamsul," said a friend who asked to remain anonymous.

Another friend, who knew him well during his UM days and was in the same batch, said Mr Haziq was once suspended in 2012 for having taken part in the anti-PTPTN demonstration in Dataran Merdeka and for vandalising photographs of national leaders.

"He graduated and practised law for a short while in Sarawak," said the college mate.

The Star reported then that Mr Haziq and two other students were fined and suspended after they were found guilty of having hung funeral garlands on national leaders' photographs.

On May 4, Mr Haziq posted a photograph of himself with PKR president Anwar Ibrahim and his family after watching the movie Avengers: Endgame.