Malaysia's Economic Affairs Minister Azmin Ali yesterday vehemently denied he was the man in a widely circulated gay-sex video that has rocked the country's politics, saying the allegation was a "vicious libel" to destroy his career.

"I categorically deny this vicious libel upon me. This is nothing but a nefarious plot to assassinate my reputation and character in an attempt to destroy my political career," Datuk Seri Azmin, who is deputy president of Datuk Seri Anwar Ibrahim's Parti Keadilan Rakyat (PKR), said in a statement.

"I will not submit to these cowardly acts and heinous attempts to distract the public from the pressing concerns of the nation and the successes of the Ministry of Economic Affairs in the planning and implementation of national development policies that are sustainable and inclusive," he added.

The denial came in a flurry of events and statements yesterday following the release of video clips on Tuesday through WhatsApp showing two men engaged in sex acts.

The WhatsApp groups were created by anonymous individuals who added in the names of journalists and PKR politicians as members of the group, before releasing the clips - a clear sign that this was a pre-planned political attack.

The clips were accompanied by screengrabs of alleged money transfers into Mr Azmin's bank accounts, although there were no details released about how the bank records related to corruption.

Earlier yesterday, a young government official and PKR member claimed in a video confession posted on his Facebook that he and Mr Azmin, 54, were the two men in the video clips.

Azmin Ali: I deny this libel upon me 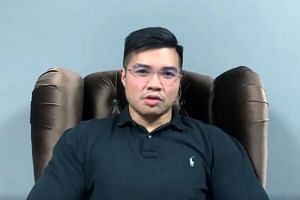 The official, Mr Muhammad Haziq Abdul Aziz, 27, said Mr Azmin was not fit to be a leader, urging the authorities to investigate the minister for corruption. Mr Haziq is the principal private secretary to a deputy federal minister.

"I, Haziq Aziz, am hereby making a sworn confession that I am the individual with Azmin Ali in the video which went viral yesterday," he said in Malay, in the Facebook video.

He claimed that the sex video was taken without his knowledge on May 11 during a by-election last month in Sandakan, Sabah, at a hotel room under Mr Azmin's name.

Yesterday evening, an extended clip of the sex acts was sent to reporters on newly created WhatsApp groups, with hints of more clips to follow.

Malaysian politics turned tizzy in the last two days, as sex videos and corruption claims had killed the careers of politicians or stalled their rise for long years, as happened to PKR president Anwar. His daughter and PKR lawmaker Nurul Izzah Anwar said there is a "personal human cost to everyone concerned as a consequence of slander".

Ms Nurul, who was dragged into politics as a teenager after Mr Anwar was sacked as deputy premier and charged with sodomy in court in 1998, described the video and photos as "dirty and scurrilous personal attacks".

"Let's focus instead on issues and things that matter. On making Malaysia better," she said. "This vile toxicity isn't part of our political culture. It must never be."

The police said they will investigate the video's authenticity, while Umno party leaders have called on members not to get involved.

Umno's acting president Mohamad Hasan said in a Facebook post yesterday: "Umno will not get involved in matters that tarnish someone, and will not be a party or social movement that condones such actions."

But on Tuesday he posted on his Facebook page a GIF, an electronic graphic animation, of Michael Jackson eating popcorn.