PETALING JAYA (THE STAR/ASIA NEWS NETWORK) - Malaysian medical graduate Jerome Chin, who donated part of his liver to his former primary school teacher, jokingly revealed that he once hated her.

The 25-year-old said Ms Leong Fong Peng often disciplined him in the past, but admitted that he was "not one of her best students".

"She took her cane everywhere and used to discipline me quite a lot," he said, recalling the time when Ms Leong taught him at SJK(C) Kong Min in Kuantan from 2003 to 2004.

It was later that Mr Chin realised Ms Leong's love and concern for her students.

"I hated the teachers who hit me, but after I left school, I started to appreciate those who paid attention to me," he said.

Mr Chin found out about Ms Leong's medical condition in July from her daughter Krystal Teh, who was also his primary school friend.

At the time, the situation looked dire, as eight volunteers who had offered to donate part of their liver were found to be unsuitable. 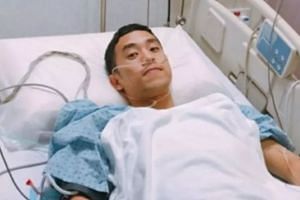 'Never thought he would go this far': Man donates part of his liver to save former teacher at Singapore hospital

As he was waiting to start his housemanship, Mr Chin told Ms Teh that he was willing to be a donor.

His father had reservations about it, but relented after Mr Chin used his medical knowledge to explain the situation clearly.

"I told him I studied this, I know what I'm doing and it will be fine. I think my being in the medical field helped convince him," he said.

Mr Chin, who studied medicine in China before graduating in 2017, said he recovered from a brief spell of jaundice after the surgery and expects his liver to regrow fully in three months.

Despite having donated 67 per cent of his liver, Mr Chin insisted he was not a hero.

After the transplant surgery on Sept 6, conducted by the National University Hospital in Singapore, Ms Leong was doing well until she was re-admitted to the intensive care unit for coughing up blood.

The bill for her treatment has come up to nearly $300,000. Ms Leong had been raising funds to cover the amount and had only $90,000 left to raise, but now, due to the recent complications, the amount needed is expected to be much higher.