PUTRAJAYA - A Malaysian man has been jailed 48 years for sexually abusing and sodomising his daughter over 600 times, including sodomising the girl at a hotel room in Mecca when they were performing the Umrah pilgrimage.

Special court for sexual crimes judge Yong Zarida Sazali on Friday (Sept 8) meted out the sentences to the 36-year-old man after he pleaded guilty to 623 charges of sexually abusing and sodomising his 15-year-old daughter, The Star reported.

Judge Yong Zarida jailed the man, a divorcee who has three daughters, to a total of 28 years for committing incest, physical sexual assault without intercourse and abusing, neglecting and sexually abusing the girl.

She also sentenced the accused, a unit trust agent, to a total of 20 years' jail for sodomising the victim. 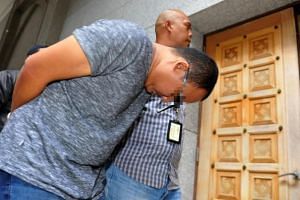 The judge ordered the sentences to run consecutively from July 26, the day the accused was nabbed.

The man was also sentenced to 24 strokes of the cane.

He covered his head as he was brought to the courtroom at about 8.40am. His younger brother and family members were present in court.

He appeared calm when the sentences were read to him.

He was charged with sodomising the girl three times daily between January and July this year, except two days before Ramadan and the first day of the fasting month in May.

The incident occured at their apartment in Petaling Jaya.

Based on the facts of the case, the accused had sodomised his eldest daughter for the first time while they were performing Umrah in Mecca on Apr 3, 2015.

Attorney-General Mohamed Apandi Ali earlier confirmed that that the man was the first in the country to be accused of hundreds of sexual charges, Bernama reported.

Local media had previously reported that the man had custody of the victim after being divorced two years ago.

Reports said the girl only told her mother of the abuse after she found out her father was planning to take her two younger sisters away from her mother to live with him.

The man was arrested after the mother lodged a police report in July.