KUALA KUBU BARU (BERNAMA) - A former trailer driver was sentenced to five years' jail and fined RM10,000 (S$3,370) - or 12 months' jail in default - by the magistrate's court on Wednesday (March 7) for driving in a dangerous and reckless manner, which resulted in an accident that killed six in a family on the North-South Expressway last year.

Judge Zulhelmy Hasan, who sat as a magistrate, handed down the sentence on 28-year-old Muhammad Syahrul Nizam Anuar after finding that the defence had failed to raise reasonable doubts against the prosecution's case.

"The court is satisfied with the prosecution in having established the case against the accused," he said.

The court however, allowed a stay of the sentence pending an appeal at the High Court following an application by his lawyer, L. Raj, and raised Muhammad Syahrul's bail from RM10,000 to RM50,000 with one surety.

Muhammad Syahrul was also ordered to report to the nearest police station once a month pending the disposal of the case.

Meanwhile, Raj said in mitigation that it was his client's first offence and that it was an accident.

Deputy public prosecutor Khairulazhwa Yusrie Mohamad asked for a sentence which took public interest into factor, saying that the accused was driving the trailer in a dangerous manner. 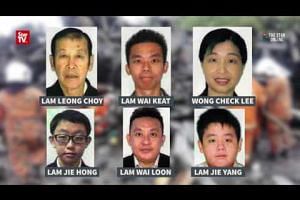 Muhammad Syahrul, who has a six-year-old daughter, was charged with committing the offence at Km403.2 of the North-South Expressway (northbound) at 7.46am on April 2, 2017.

Lawyer Azinuddin Karim held a watching brief for the family of the victims.

The victims were on their way to visit their ancestors' graves in Bidor, Perak, when the trailer, with Muhammad Syahrul at the wheel, skidded and then crashed into their SUV near the Tanjung Malim toll plaza.