A civil forfeiture action has been filed to freeze the accounts, which are said to be worth RM48 million (S$15.96 million). The money is believe to be from state investment fund 1Malaysia Development Berhad (1MDB).

A source told The Edge Markets: "Three of the seven bank accounts are said to be fixed deposit accounts."

"We believe the monies were transferred from foreign companies, that is said to be done by Hock Peng's son Low Taek Jho (Jho Low)," the source said.

The civil forfeiture application was filed in the Kuala Lumpur High Court under Section 56 of the Anti-Money Laundering, Anti-Terrorism Financing and Proceeds of Unlawful Activities Act, 2001.

The Act permits the government to seize assets without a prosecution action.

The court is expected to fix either Friday or Monday for case management, the report said.

Jho Low's spokesman issued a statement denouncing the move, saying it  demonstrated the Mahathir Mohamad-led government's "persistent strategy of harassment and political persecution against their perceived opponents by any means necessary."

While Jho Low has denied any wrongdoing, he has refused to return to Malaysia to face trial, claiming he would not receive a fair hearing.  According to his spokesman, the government's move to freeze his father's bank accounts is "yet another example of  the Mahathir regime’s trial by media and is further evidence that it is simply not possible to receive a fair trial in Malaysia." 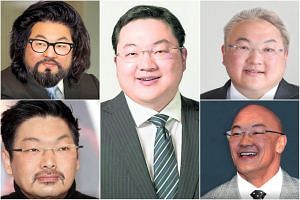 The move to freeze the assets of Low Taek Jho's father comes after the seizure of his family's "luxurious mansion" in Penang earlier this week.

Low Taek Jho, better known as Jho Low, has condemned the seizure of the family home as an attempt by Prime Minister Mahathir Mohamad to score political points.

"The Low family property was built and completed around 20 years ago, during Mahathir's previous administration. This was more than a decade before 1MDB ever existed, and at that time, Mr Low was still a teenager," a spokesman for Low had said following the seizure.

It was reported in January that the police are looking for Low's father and mother Goh Gaik Ewe.

Both Low and his father were charged in absentia at the Putrajaya Sessions Court in August last year in relation to the misappropriation of 1MDB funds. Low faces eight counts of money laundering, while his father faces one charge.