KUALA LUMPUR (THE STAR/ASIA NEWS NETWORK) - Malaysian opposition leader Anwar Ibrahim and the Federal Territories Pardons Board have failed to strike out a lawsuit filed by a lawyer to challenge the legality of the royal pardon Datuk Seri Anwar received two years ago.

High Court judge Akhtar Tahir made the decision on Monday (Sept 21) after finding that Mr Mohd Khairul Azam Abdul Aziz has locus standi as a member of the public and a lawyer to file the originating summons.

In his ruling, the judge said the Malaysian King had carried out his executive function when granting the pardon to Mr Anwar and it therefore involved procedures and laws where the exercise of executive powers could be questioned.

"If it involves the executive power, why can't it be heard and tried in court?" the judge said on Monday.

The court also said that there were triable issues that needed to be heard in full and added that the case was not a clear-cut matter that could be summarily dismissed.

Justice Akhtar said it was only proper to initiate the proceedings as evidence, including oral evidence, could be called.

"This is a civil matter that must be proven on the balance of probabilities. I am dismissing the (striking out) applications by both defendants with no order as to costs," he said.

The court then fixed Feb 18 next year for case management, and trial dates are set for March 24 to 26.

Meanwhile, Mr Khairul Azam's lawyer Mohamed Haniff Khatri Abdulla told the press that the court was of the view that his client had locus standi to file the action as this had to do with the federal Constitution.

"As a member of the public, my client has the right to file the action. And not only that, he is a qualified person, a lawyer and capable of making his case," Mr Haniff said. 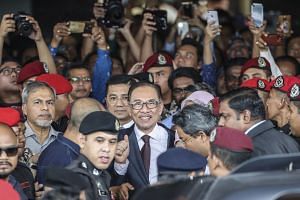 After two-decade quest to become Malaysia's premier, Anwar says he can wait a bit more

Mr Khairul Azam, who is the sole plaintiff, named the Pardons Board and Mr Anwar, 73, as the first and second defendants respectively.

In his statement of claim, Mr Khairul Azam said the Federal Court had on Feb 10, 2015, affirmed a conviction against Mr Anwar pertaining to the sodomy charge.

The Federal Court, Malaysia's apex court, had maintained the five-year imprisonment sentence meted out by the Court of Appeal against Mr Anwar, who later went to jail to serve his sentence.

However, on May 9, 2018, after the 14th general election and a new government was formed, the plaintiff claimed that several illegal and unconstitutional moves were taken to ensure Mr Anwar was pardoned and released from his sentence.

Mr Khairul Azam claimed that two days after the new government was formed at federal level and before the formation of a complete Cabinet line-up under Article 43 of the Federal Constitution, former prime minister Mahathir Mohamad announced that Mr Anwar was given a full pardon by the King, who was then Sultan Muhammad V of Kelantan.

Subsequent to the pardon, Mr Anwar was able to contest in a by-election and was elected as the Port Dickson MP.

The plaintiff is contending that this was against the Constitution as Articles 42(4) and (5) of the Federal Constitution state that the power of pardon by the King must be with the advice of the Pardons Board.

No need for me to explain further on sodomy cases: Anwar Ibrahim

Anwar Ibrahim's sodomy cases: What you need to know

The plaintiff claimed that it was impossible for a valid Pardons Board to be able to convene properly in two days after a new government was formed.

Mr Khairul Azam is seeking a declaration that the Pardons Board was not formed legally, therefore its advice to pardon the second defendant, Mr Anwar, was illegal and invalid from the beginning.

He also sought a declaration that the pardon bestowed on Mr Anwar was illegal and invalid.

On May 13, Mr Anwar filed the striking out application on grounds that Mr Khairul Azam has no locus standi to file the action and that it was frivolous, an embarrassment and an abuse of the court process.