A source involved in the high-level probe team - which also includes the public prosecutor, the central bank and the police - told The Straits Times that the Malaysian Anti-Corruption Commission (MACC) on Tuesday arrested a director of a firm named in the July 3 allegation by the Wall Street Journal (WSJ) that US$700 million  (S$955 million)  linked to debt-laden 1MDB was deposited in private accounts belonging to Prime Minister Najib Razak, who heads the 1MDB advisory board.

The Putrajaya magistrate court issued a five-day remand order to aid investigations into the claim.

"It is concerning the same transaction with SRC International," the source said, referring to Monday's arrest of a company director to aid investigations into the former 1MDB subsidiary - which was transferred to direct ownership by the finance ministry in 2012. 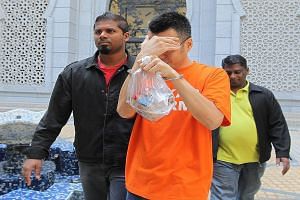 The MACC prosecutor Ahmad Sazilee Abdul Khairy told reporters after the remand hearing that the detainee is the managing director of Ihsan Perdana, a company engaged to run corporate social responsibility programmes for 1MDB.

The source also told the Straits Times the detainee is a "Datuk" - a Malaysian royal title - of Malay ethnicity who is a director with a company that had business transactions with SRC. On July 3, soon after the WSJ article, a Datuk Shamsul Anwar Sulaiman had released a statement as Ihsan Perdana managing director, denying the company had transferred money to Datuk Seri Najib's accounts.

The task force has  frozen bank accounts and raided the headquarters of 1MDB since the  July 3 allegation by WSJ that US$700 million linked to the debt-laden firm was deposited in private accounts belonging to Mr Najib. According to the financial newspaper, RM42 million (S$15 million)  from SRC International eventually ended up in Mr Najib's personal accounts.

Mr Najib has denied ever using state funds for "personal gains" but has not confirmed or denied if he received the money.

The Prime Minister has been facing growing calls to resign led by influential predecessor Mahathir Mohamad. Criticism of Mr Najib's leadership has largely centred around claims of financial mismanagement of 1MDB.

But Mr Najib has accused Tun Dr Mahathir - who was Malaysia's prime minister for 22 years until 2003 - of conspiring with foreign media in a "political sabotage" to topple him via undemocratic means.