KUALA LUMPUR (REUTERS) - Environmental activists will march on Malaysia's Parliament on Thursday (July 18) to demand lawmakers strengthen the country's decades-old forestry laws and amend the Constitution to give greater protections to its dwindling rainforests.

Ms Shariffa Sabrina Syed Akil, president of non-government organisation Peka Malaysia, which is organising the march in the capital Kuala Lumpur, said an estimated 300 people would deliver a memorandum to lawmakers.

An online petition launched by Peka Malaysia also had almost reached its target of 200,000 signatories.

"Everywhere in the country people are talking about climate change but without forests it is going to get worse," Ms Shariffa told the Thomson Reuters Foundation on Wednesday.

"If they (lawmakers) don't do anything - we are going to lose the forests in all our states."

The world lost forested areas the size of Italy in 2017 as forests were cleared to make way for farms, according to Global Forest Watch.

Malaysia was among the top five countries that suffered the biggest losses that year. 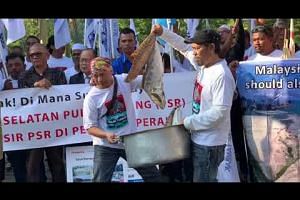 China is ravaging faraway forests to feed its growing timber industry, while protecting trees at home

As well as being a major producer of timber and timber products, the South-east Asian country is the second-largest grower of palm oil - the world's most widely used edible oil, which is found in everything from margarine to biscuits, and soap to soups.

Plantations operating in both the Malaysian and Indonesian parts of Borneo have come under scrutiny over logging activities, the clearing of forests, fires and labour abuses.

Under Malaysia's Constitution, forest management largely falls under state not federal control, and this has often led to economic interests being prioritised over the environment and rights of indigenous people, Ms Shariffa said.

Laws that are meant to protect Malaysia's forests were last changed almost 30 years ago, she said, adding that stronger penalties were needed to stop clearing and corruption.

A source at WWF Malaysia, who asked not to be named citing the group's policies, said it supported demands for amendments to the forestry law and greater federal control, as this would make management of the country's forests more responsible.

Two-thirds of Malaysian lawmakers need to back the suggested law and constitutional changes for them to become reality, Ms Shariffa said.

"Of course it will be difficult... (but) we have to start the ball rolling, create awareness and wake people up to the fact that if we don't change the laws we will lose everything."

Some lawmakers have already come out in support of the demand for law changes, she added.

Mr Xavier Jayakumar, Malaysia's Minister for Water, Land and Natural Resources, could not be reached for comment.

Earlier this year, the Malaysian government said it would sue the local government of Kelantan state for failing to uphold land rights of its indigenous people.

Logging companies, which have cleared vast forest areas in Kelantan for durian and rubber plantations, had deprived indigenous people of their ancestral land and resources, the office of the attorney-general said.

Peninsular Malaysia, Sabah and Sarawak had an estimated 18 million hectares of forested area in 2011, according to the WWF website.

There are 444 protected areas in Malaysia, it added, with both land and sea areas totalling 4.1 million hectares.

"In Malaysia, the environment always comes last and has never been a priority," Ms Shariffa said. "People haven't woken up yet because there is still food on the table."