PETALING JAYA (THE STAR/ASIA NEWS NETWORK) - Malaysia has ordered an immediate revision on a Year Three textbook that critics say told girls they would be ostracised and bring disrepute to their families if they did not protect their modesty.

"The meeting concluded the infographic was against the United Nations Convention on the Rights of the Child," she said.

"The infographic is also gender-biased and the captions are sensitive to some... The department is meeting with the Curriculum Development Department and Dewan Bahasa dan Pustaka to iron this out and any other mistakes in the textbook.

"We will also look into preventive measures," said Ms Teo.

Malaysians said the infographic, which was shared online, was guilty of victim shaming.

The graphic tells the story of a girl named Amira who takes precautions such as wearing modest clothes and changing behind closed doors.

It goes on to say that if Amira does not take care, she would be shamed and ostracised, bringing disrepute to her family. 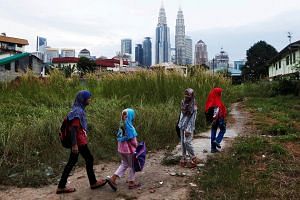 "Boys need to be taught how to respect girls too," said Ms Yeoh.

Women's Aid Organisation vice-president Meera Samanther said such content teaches young girls they alone are responsible for their safety and family honour, ignoring the role of adults and the state in protecting children.

"Nine-year-old girls are not sexual objects and should not be thinking about their dignity," said Ms Meera.

The Pixel Project Founder Regina Yau said while the move to start sex education at Year Three was commendable, the approach was "absolutely inappropriate".

"Why is there not a page teaching boys to also take responsibility for their own actions?" said Ms Yau.

"Textbooks in primary schools need not have words that are sexual in nature or materials that would affect the public," he said.

"Regardless of how you are dressed, be it children or adults, (rapists) will still rape... The fault is always on the person who commits the crime, not the victim," said Mr Kee Tze San.

Mr Tom Leng tweeted such teachings were the reason young victims of sexual assault did not report or reveal their encounters to family, friends or the authorities.