KUALA LUMPUR (AFP) - Malaysia will hold polls soon, Prime Minister Najib Razak said on Thursday (Dec 1), vowing "to fight until the death" and showing no sign of succumbing to calls to quit over a massive financial scandal.

It was the first time the Malaysian leader has signalled he may bring forward polls not due until mid-2018, as he addressed the annual assembly of his ruling United Malays National Organisation (Umno) and called for party unity.

"I know, many can feel the heat... and are waiting for directions to battle in the polls that will be held soon," he said.

Speaking to some 2,600 delegates of Umno, which represents the Malay heartland whose support is crucial for any Malaysian leader, Mr Najib promised to uphold Islam and protect the community's interests.

The party has been in power ever since independence in 1957 and its annual gathering is the country's most closely watched political event.

"God willing, we will fight until the death and until the last drop of blood," Mr Najib told delegates, who had earlier greeted him with enthusiastic applause, signalling their support for his leadership. 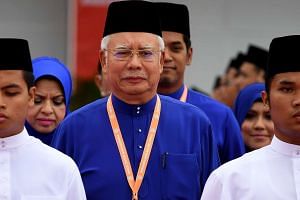 "Please realise my (Malay) race, do not falter for a moment as we are facing unprecedented challenges," he added.

Mr Ruslee Bedol, a delegate from southern Johor state, said that Umno had already started preparing for a vote and said "we expect elections in the next six months".

Mr Najib is holding on to power despite damaging allegations he took part in the alleged looting of billions in state fund 1MDB.

His position in the party is secure because he is backed by most of the party's 191 powerful division chiefs.

The premier has also purged the party of any critics over the 1MDB scandal, which he mentioned only once in his speech.

Last July, he fired his deputy, Mr Muhyiddin Yassin, after being criticised over the 1MDB scandal, shook up his cabinet and surrounded himself with party loyalists.

Malaysia has been seized since last year by the scandal, which has sparked investigations in several countries.

The US Justice Department, which has filed lawsuits to seize assets it claims were purchased with stolen 1MDB money, says the fund was pillaged in an audacious campaign of fraud and theft that involved an unnamed top Malaysian official.

A Malaysian Cabinet official has since admitted that individual was Mr Najib.