KUALA LUMPUR (REUTERS) - Malaysia's government will likely present an expanded Budget on Friday (Oct 11) to temper a weak economic outlook, as it grapples with global recession fears, the protracted US-China trade war and a large debt pile left behind by its predecessors.

South-east Asia's third-largest economy bucked a global cooling trend and grew faster than expected over the first half of 2019, but analysts say growing protectionist policies around the world will eventually drag on the trade-reliant country.

Prime Minister Mahathir Mohamad's government will at the least need to sustain its development spending to prop up domestic demand next year, economists have said, even as it continues to deal with RM1 trillion ringgit (S$329 billion) in debt that has been blamed on embattled former premier Najib Razak's administration.

"We think Budget 2020 will likely include a contingency plan to counter the effects of a slowdown from the US-China trade war - a 'so-called' mini fiscal stimulus package," RHB Investment Bank said in a note.

The contingency fund, which the bank estimated could amount to RM3 billion, will be on top of an estimated RM55 billion that the government will likely set aside for its 2020 development budget, RHB said.

Tun Dr Mahathir's government bucked expectations when it tabled an expanded Budget in November last year, in a bid to boost revenue despite the slowing economy. It also set a higher fiscal deficit target over the next few years to make room for domestic spending while chipping away at its debt.

China and Malaysia resumed a massive "Belt and Road" rail project in July at a heavily discounted cost after a year-long suspension of the project by Dr Mahathir, who followed through an election pledge to renegotiate or cancel "unfair" Chinese mega-projects approved by his predecessor Najib.

An expanded Budget for next year could mean a slower pace of fiscal consolidation than forecast by the government, though it is something that is to be expected with the soft outlook, Standard Chartered said.

In July, Finance Minister Lim Guan Eng said it would be difficult to meet the 3 per cent fiscal deficit target for 2020 due to uncertainties around the US-China trade war. 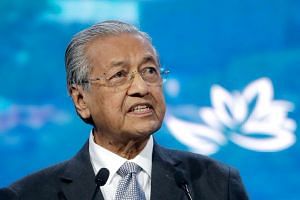 "Nevertheless, we do not expect this to raise rating concerns given the challenging economic outlook, as long as the medium-term fiscal consolidation target is adhered to," Standard Chartered said in a note, projecting the deficit to fall to around 3.2 per cent.

The government has said that it will not introduce any new taxes in the 2020 Budget, but it could expand the coverage of existing taxes to broaden its revenue base, according to Maybank Investment Bank.

Dr Mahathir's government had abolished an unpopular consumption tax last year as part of an election pledge, but offset the loss in revenue by reintroducing a sales and services tax (SST), raising tax payouts from gambling and the sale of privately-owned properties, and introducing new taxes on sugar consumption and airport use.

"The widening of SST is ongoing... this will continue further in Jan 1, 2020 with more imported online/digital consumer services being included," Maybank said.

"We also would not discount the possibility of broader sugar tax coverage that is currently charged on canned and bottled drinks to include powdered brew like the 3-in-1 coffee mix and carbonated drinks sold at fast food restaurants."