Malaysian Prime Minister Mahathir Mohamad has said that foreigners will not be allowed to buy homes at the US$100 billion (S$136 billion) Forest City project near Singapore, or granted visas to live there.

His blunt statement puts a question mark over the fate of the mega project that was marketed primarily to Chinese buyers and is touted to be home to 700,000 people.

"One thing is certain, that city that is going to be built cannot be sold to foreigners," Tun Dr Mahathir said at a news conference yesterday in Kuala Lumpur. "We are not going to give visas for people to come and live here. Our objection is because it was built for foreigners, not built for Malaysians. Most Malaysians are unable to buy those flats."

Responding to queries from The Straits Times yesterday, Forest City master developer Country Garden Pacificview said it had launched about 20,000 residential units for sale by the end of last year, of which about 18,000 were sold. It declined to say how many were sold to Singaporeans.

Some 70 per cent of units have been bought by Chinese buyers and 20 per cent by Malaysians, according to a Reuters report.

Forest City - a 60-40 joint venture between Country Garden and a company that the Johor royal family controls - is slated to be built on four artificial islands, just north of Tuas, within 30 years.

Dr Mahathir has long criticised the reclamation project that is three times the size of Sentosa, claiming that it was an erosion of Malaysian sovereignty. He even suggested in a speech last December that he hoped Forest City would become an actual forest with baboons and monkeys as residents, said local media reports.

Country Garden issued a statement of clarification yesterday, saying that Forest City "has complied with all laws and regulations with the necessary approvals to sell to foreign purchasers".

It said it is "currently in touch with the Prime Minister's Office for clarifications, as we believe Tun Mahathir's comments may have been taken out of context in certain media reports". It also said his comments "do not correspond with the content of the meeting between him and founder and chairman of Country Garden Holdings Yeung Kwok Keung".

The developer added that they had a 40-minute closed-door meeting on Aug 16, prior to Dr Mahathir's visit to Beijing. It said: "During the meeting, Tun Mahathir reiterated that he welcomes foreign investments which could create employment opportunities, promote technology transfer and innovations that could benefit Malaysia's economic growth and job creation."

The aggressive building drive in Johor and Iskandar has been a cause of concern. Speaking in Parliament in 2015, Mr Lawrence Wong, then Minister for Culture, Community and Youth, had said Singaporean buyers were becoming wary of the Johor housing market. "There is indeed a real concern about future oversupply in the property market there, and hence the potential decline in value of homes," he had said. 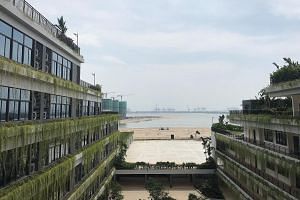 A prospective Singaporean buyer who wanted to be known only as Mr Tay told The Straits Times that he visited the Forest City showroom here yesterday as he was shocked by the news. "The staff said they don't know if (Dr Mahathir's comments) are true, and told me to check back again in two days," said Mr Tay, an urban planner in his 40s.

This is not the first project Dr Mahathir has targeted. Others now in limbo after his visit to Beijing last week include the US$20 billion East Coast Rail Link and a Trans-Sabah gas pipeline project backed by Chinese state companies.

Plans to build a high-speed rail linking Kuala Lumpur and Singapore, which was expected to be a big boost to Forest City, are also being reviewed by Dr Mahathir's administration.