KUALA LUMPUR - Malaysian lawmakers were sworn in to Parliament on Monday (July 16), with opposition MPs staging a brief protest walkout as retired judge Mohamad Ariff Yusof was being sworn in as Speaker.

Opposition MPs said the new government had appointed a Speaker without following the two-week due notice.

"We are not objecting to the choice of Speaker but the process by which he was named as candidate," said Datuk Seri Ahmad Zahid Hamidi, an Umno lawmaker and former deputy prime minister who is now opposition chief.

He was accompanied by fellow lawmakers from Barisan Nasional (BN) as well as those from Parti Islam SeMalaysia (PAS).

Former prime minister Najib Razak, who joined the walkout, said: "As opposition, we want to stress on the principle of adhering to the rules."

It was the first time the Pakatan Harapan (PH) alliance sat on the government bench. The historic sitting also saw Tun Dr Mahathir Mohamad returning to Parliament as premier.

In response to the mass walkout, Dr Mahathir said: “They’re now behaving in the very same way (as the opposition did previously), which they say is bad.”

Ninety of the 222 lawmakers who took their oaths were first-time MPs - the highest number since Parliament first convened in 1959. It includes a college student who will be the Lower House's youngest MP.

BN has been reduced to three parties from 14, with only 51 MPs in the aftermath of the May electoral result. It still forms the largest opposition bloc, with PAS holding 18 seats.

BN and PAS MPs stage walkout over the nomination of Speaker

BN's former allies in Sarawak have 19 seats, while several BN Umno MPs have left the party to act as independents. 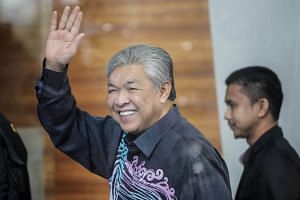 Najib was sworn in as an opposition MP for the first time in his political career. He faces graft charges over misappropriation of public funds during his tenure in office.

The Parliament sitting will be held for 20 days until Aug 16.

On Tuesday, the Malaysian king, Sultan Muhammad V, will officially open the first session of the 14th Parliament.

The last Dewan Rakyat sitting was on April 5 before Parliament was dissolved on April 7 to make way for the general election.