PETALING JAYA (THE STAR/ASIA NEWS NETWORK) - Police have stepped up their alert within the country and Malaysians travelling to Thailand have been asked to be wary in the wake of intelligence reports that Syrian militants are planning terror attacks there.

Bukit Aman has beefed up security in Malaysia, particularly around places associated with Russian and Western interests, which the reports indicated the militants were likely to target.

Although there has been no intelligence that similar attacks were being planned in Malaysia, the police were not taking any chances, said Inspector-General of Police Tan Sri Khalid Abu Bakar.

"We will strengthen security to ensure that no attack takes place in the country. We will also closely monitor Russian interests in the country and look out for any possible threats," he told The Star yesterday.

Although the IGP had on Thursday (Dec 3) dismissed the claims of security risks in the country, which led to the Professional Squash Association Women's World Championships being "in doubt", he said any report of the latest Islamic State (ISIS) threat would not be taken lightly.

"We are always on guard. We will also monitor the premises of Western countries as well," he said. 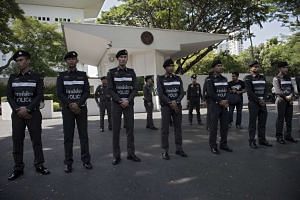 Syrians linked to ISIS are in Thailand to attack Russian interests: Leaked document

They had also prepared a "hit list" of Malaysia's top leaders but Bukit Aman Special Branch Counter Terrorism Division succeeded in detaining the suspects before the plan could be carried out.

Thai police received a warning from Russia's state security agency that 10 Syrians who might be linked to ISIS could stage attacks in Thailand on targets linked to Russia.

A memorandum on Nov 17 urged officials to confirm the information and improve security at likely targets linked to Russia, the United States, Britain, France, Germany, Sweden and Australia.

The Erawan Shrine in central Bangkok was the target of a bombing attack in August which killed 20 people, including five Malaysians, one of whom was a five-year-old girl.

It was not linked to ISIS but to militants from China's Muslim Uighur minority.

The Russian warning also stated that the militants could be planning attacks during Christmas and New Year when many revelers from the West converge in Thailand to party.

Thailand is a major holiday destination for Russian tourists, especially during the end of the year holidays.

According to Moscow intelligence reports, about 10 militants entered Thailand between Oct 15 and Oct 31 to target Russians.

"The Syrians travelled separately. Four went to Pattaya, two to Phuket, two to Bangkok and the other two to an unknown location," the report stated, citing information from Russia's top intelligence agency.

"Their purpose is to create bad incidents to affect Russians and Russia's alliance with Thailand."

There are fears that Malaysians travelling to Thailand, especially during the current school holidays, could be caught up in any attack, like what happened during the Erawan Shrine bomb blast.

According to Thailand's Ministry of Tourism and Sports, Malaysians made up the second highest number of tourist arrivals in Thailand by nationality in October 2015 - second only to China.

Some 250,000 Malaysian tourists travelled to Thailand during the month.

"Thailand is a very popular destination among Malaysians. It is near to Malaysia, the airfare is not expensive and offers good entertainment for tourists," said Malaysian Chinese Tourism Association's (MCTA) national president Datuk Albert Tan Sam Soon.

Asked what were the top cities visited by Malaysians, he said: "First-timers will go to Bangkok and then to either Pattaya or Phuket. Pattaya is only one-and-a-half hours away by road."

Tan said the average stay for Malaysians in Thailand was usually four to five days, with many visiting famous spots such as the floating market, the Grand Palace in Bangkok and elephant tour in Phuket.

On security and safety concerns, he said Thailand was generally a safe place to travel, with the exception of the recent Bangkok blast in August.

In Bangkok, Malaysian ambassador to Thailand Datuk Nazirah Hussain advised Malaysians travelling there to always be vigilant and alert.

"Contact the embassy for any information or assistance," she said.