"I'm in communication with our Singaporean counterpart. Last week, I was briefed by our Attorney-General (Tommy Thomas) and presented the case (to the Cabinet) on Wednesday," said Datuk Seri Azmin.

"We will meet with my counterpart in Singapore soon and will discuss the details," he told reporters after delivering a keynote address at the EU-Malaysia Trade and Investment Forum 2018 in Kuala Lumpur.

Azmin said an announcement on the matter would be made this week.

The 350km-long HSR deal, inked in 2016 under the previous Barisan Nasional administration, is one of several mega projects being reviewed by the new Pakatan Harapan (PH) government after it took power in May.

The HSR would slash the land travelling time between Singapore and Kuala Lumpur to just 90 minutes - compared to four to five hours by car. It was originally expected to be completed in 2026.

Malaysian Prime Minister Mahathir Mohamad last week said his government has not yet officially informed Singapore of its decision on the HSR, but that the city state knows what Malaysia wants to do with it. He had previously expressed his reluctance to go ahead with the project in media reports. 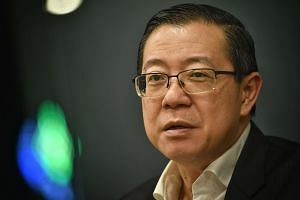 The country's Finance Minister Lim Guan Eng said in an interview with The Straits Times last week it had received offers to halve the cost of building the HSR link, and would consider reviving the project if its price tag was lowered. While he said that he has not received any formal proposals, the offers had showed that the current cost of the Malaysian portion of the link - estimated at RM110 billion (S$37 billion) - was "exorbitant".

Singapore's Transport Minister Khaw Boon Wan said in Parliament last week that it had yet to receive a response from Malaysia after sending a diplomatic note on June 1 seeking clarification on Kuala Lumpur's stance towards the HSR.

He said the Republic had so far incurred S$250 million on the project, with a further S$40 million needed by the end of the year.