Ms Suu Kyi seemed to be a "changed person" and he had lost faith in her, said Tun Dr Mahathir. "She did not want to say anything against the action taken by the (Myanmar) military against the Rohingya. So, we made (it) quite clear that we don't really support her any more," he told host Ghida Fakhry of the Turkish international news channel TRT World last Saturday.

The interview was held on the sidelines of the United Nations General Assembly (UNGA) in New York before he left for London.

Dr Mahathir said that when Ms Suu Kyi was under house arrest, Malaysia campaigned to get her released. But when he wrote to Ms Suu Kyi, he did not receive any reply and was "very disappointed".

"We have complained to the world about the treatment of the Rohingya. In fact, we have ourselves received quite a lot of Rohingya people in our country," he said.

Dr Mahathir had addressed the UNGA last Friday over the plight of Myanmar's Rohingya Muslim minority, who have been driven to Bangladesh in huge numbers.

He criticised the authorities in Myanmar and Ms Suu Kyi for denying that the Rohingya people were being murdered and their homes torched, with over a million refugees forced to flee. Dr Mahathir also questioned the world for keeping silent on the massacre. 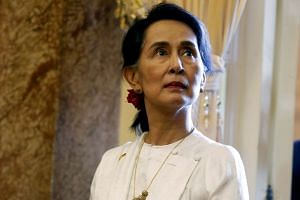 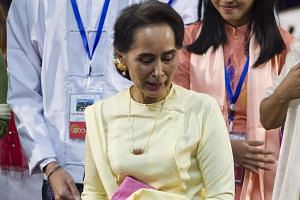 Several other countries have similarly criticised Ms Suu Kyi. There have been calls to revoke the Nobel Peace Prize awarded to her in 1991, while Canada has stripped Ms Suu Kyi of her honorary citizenship.

Responding to Dr Mahathir's speech at the UN, Klang MP Charles Santiago said yesterday the government needs to also have the political will to promote and protect the rights of refugees in Malaysia.

Mr Santiago, who is chairman of the Asean Parliamentarians for Human Rights group, said that Malaysia needs a comprehensive refugee policy that looks at access to gainful employment, healthcare and structured education for every refugee.