His statement recalled a huge scandal that broke out in 2011 when Umno-led Barisan Nasional (BN) was in power, that led to the stepping down of a woman minister whose family is linked to the project to rear cattle.

NFC received the loan in 2008, with the funds to be used to grow the local beef market by rearing cattle locally so as to reduce import bills.

The company is controlled by the family of former Umno minister Shahrizat Jalil, who was Umno's Women wing's chief.

The matter later became widely known as the cows-and-condos scandal, when it was reported that the funds were allegedly used to buy condominiums in Singapore and Malaysia, and to open fine-dining restaurants in Singapore.

Mr Lim said in a statement on Monday that the sum owed by NFC is just over RM253 million which includes interest and late interest charges as of April 30.

"The Ministry of Finance has decided to seek full repayment of the loan to NFCorp and this matter was referred to the Attorney General's Chambers on Aug 29, 2018 for further action," Mr Lim said, as quoted by The Star newspaper. 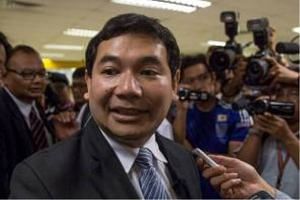 "The Attorney General's Chambers is currently looking into the matter and will announce the latest development when available," he added.

The move is the latest by the year-old Pakatan Harapan government to seek redress in past scandals involving the BN government.

This is different from information gleaned from a due diligence report by accounting firm PricewaterhouseCoopers (PwC), Mr Lim added, as reported by The Star.

In the PwC report, it showed that Mr Mohamad Salleh and his children - Izran Salleh, Izmir Salleh and Izzana Salleh - as well as representatives from the federal and state governments were the NFC board of directors between Dec 6, 2007 and Dec 31, 2011.

The scandal broke out in 2011 after Malaysia's Auditor-General's annual report's highlighted that NFC was poorly managed and managed to meet just 41.1 per cent of its target for 2010, and calling the company "a mess".

In March 2012, at the height of the cows-and-condos scandal, Ms Shahrizat stepped down as Women, Family and Community Development Minister, but retained her post as Umno Women wing's chief.

She said then: "I have nothing to do with NFC. I just happened to be married to the chairman. I've been in politics a long time, and it is the right thing to do."

Ms Shahrizat, now 65, was not picked by BN to run as a candidate in the 2014 and 2018 general elections, and announced her retirement from politics after her coalition lost power in May last year.

Mr Mohamad Salleh said in a statement reported by Malay Mail online news on Monday that there is a new buyer for NFC that will fully repay all outstanding loans, and the government has been informed of the plan.

He said NFC's new buyer “has already agreed to undertake full responsibility of the liabilities" of the initial loan amount "and is prepared to make a ‘Full Redemption’ full payment towards the actual outstanding loan amount to the government".

He did not say who the new buyer is or why the person or company would be willing to pay up money borrowed by the current owners.