The Malaysian government is working towards the winding up of state investment firm 1Malaysia Development Berhad (1MDB) under a plan spearheaded by a high-level government unit called the Budiman committee. Here is a look at the debts, assets and liabilities of the company. 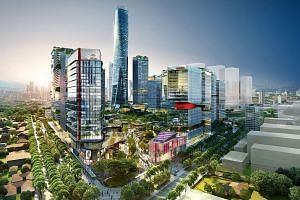 Malaysian government prepares to wind up 1MDB amid scandal

* Bond principal US$3.5 billion which Abu Dhabi had guaranteed

* Payment for termination of options US$0.48 billion

* Bandar Malaysia, 197ha township on the fringes of KL that will house the terminus for the high-speed rail link to Singapore, 40 per cent owned by 1MDB.

The development is facing problems as the 1MDB's 60 per cent partners, the state-owned China Railway Group and Johor-based Iskandar Waterfront Holdings, have sought repeated extensions to capital injections.

* Tun Razak Exchange or TRX, a joint development between 1MDB and Australia's Lend Lease to develop a lifestyle quarter over 7ha near Bandar Malaysia, comprising a hotel, three residential towers and a retail mall, with costs estimated at RM8 billion. The total size of TRX is 28ha.

Only six months ago, this 94.7ha plot of land was in great demand, particularly from several Chinese corporations. State-owned China Metallurgical Corp was proposing to pay about RM2 billion for it or participate in a joint development with 1MDB that would guarantee profits of about RM3.5 billion.

But that deal is no longer on the table due to differences over valuation issues, property executives say.