KUALA LUMPUR - The Malaysian government has decided to suspend the recruitment of all foreign workers to Malaysia, including those from Bangladesh, Deputy Prime Minister Ahmad Zahid Hamidi said on Friday (Feb 19).

The freeze would be enforced with immediate effect and will stay in force while the government reviews the two-tier levy programme for foreign workers, The Star Online quoted Datuk Seri Zahid as saying.

Effective Feb 1, Malaysia had implemented a new system of charging levies on foreign workers based on two different categories of sectors workers are employed in.

"We urge all employers to recruit local workers," Mr Zahid said, adding that existing illegal workers in Malaysia would be detained and deported.

Mr Zahid, who is also the home minister, said it was hoped that Malaysians, especially youths, would respond to the government's call for locals to take up the jobs now held by foreigners and become the mainstay of the nation's workforce to drive national economic growth.

His announcement was made mere hours after a separate press conference by the country’s Human Resources Minister Richard Riot on the entry of Bangladeshi workers under the signed MOU.

“I want to correct the misconception that Malaysia would take in 1.5 million Bangladeshi workers. This isn’t correct, it is not true,” said Datuk Seri Richard.

He adds that the figure is the total number of Bangladeshis registered to seek employment abroad, and not necessarily heading to Malaysia. 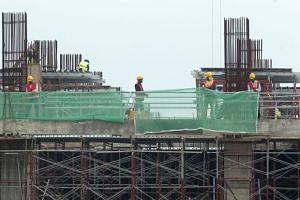 On Thursday, Malaysia and Bangladesh had signed a Memorandum of  Understanding (MoU) to receive 1.5 million workers in stages over the next three years.

He said that the government would focus on the review, which began on Feb 15, to assess the number of foreign workers required by local companies, adding that there was no fixed timeline for the recruitment freeze.

"We'll take the time we need to conduct the review," he told The Malaysian Insider.

Putrajaya is facing resistance and criticism from several civil and trade groups over its plan to bring in the foreign workers in significant numbers. Worker groups such as the Malaysian Trade Unions Congress (MTUC) said locals should be given priority for jobs.

Its secretary-general N. Gopal Kishnam said it was the right decision to suspend the intake but added that the government should set up a Royal Commission of Inquiry to examine the issue.

But industry groups criticised the recruitment freeze, saying that the policy would affect the economy and leave employers in limbo, reported news site Malaysiakini. The Federation of Malaysian Manufacturers asked the government to consult with the industry, and to give clearer details on the timeline of the suspension, while the Malaysian Employers Federation called on the government to avoid such "flip-flop"decisions.

There are currently an estimated 2.1 million registered foreign workers in Malaysia, along with 1.7 million illegal foreign workers. The migrants, who are mostly from Indonesia, Myanmar, Nepal and Bangladesh, work mostly at construction sites, palm plantations, vegetable farms and restaurants.