KUALA LUMPUR - Malaysia could dissolve Parliament in March, cutting short its current sitting and paving the way for elections in April or early May, sources told The Straits Times.

As both government and opposition leaders criss-cross the country this past month to prepare for the upcoming polls, Prime Minister Najib Razak is expected to table new electoral maps next week, which critics say favour his ruling coalition Barisan Nasional (BN).

Approval of these new maps could be the last business for this Parliament, which had been scheduled to sit until April 5. The new boundaries could be passed by lawmakers and given the royal assent within days.

Parliament had earlier been expected to also debate a proposed law to curb fake news, but this may be abandoned as the draft Bill is not ready yet.

"Dissolution as early as March 29 or 30. Polling end of April or beginning May," said a source.

Potential dates for balloting being mentioned are the weekends of April 28, May 5 and 12.

Another source pointed out that the Cabinet met on Wednesday (March 14), instead of the usual Friday when Parliament is sitting, so that Datuk Seri Najib could brief BN leaders on plans to hold an election before the Muslim fasting month begins in mid-May.

Lawmakers are currently debating the King's Speech, with ministers slated to wrap up next week. Although four days have been scheduled as usual for them to respond to issues raised by MPs, the process can be accelerated with the Speaker limiting the time for each reply. 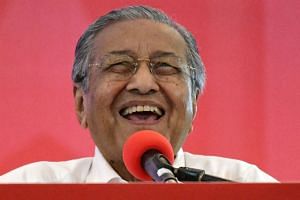 The new maps - which analysts say could hand BN up to 10 wards in the 222-seat Parliament without any increase in support - can also be presented to the House this week, but only debated and passed next week.

The Election Commission has said that it can put into effect the new boundaries just days after they receive royal assent.

The government had earlier aimed to pass a new law against "fake news", which was criticised by the opposition as a means to muffle dissent. A committee was announced at the end of January, but a source said that "they are having trouble drafting a Bill that is legally sound".

De facto law minister Azalina Othman Said, who heads the committee, had said on March 5 that she was confident the draft will be ready this week. But she then revealed on Tuesday that the committee was still seeking input from stakeholders.

Another indicator is the unveiling of BN's election manifesto, set for April 7.

In past elections, BN has revealed its pledges only after the dissolution of Parliament, and the country has gone to the polls within four weeks of BN's manifesto launch.