Some 70 per cent of voters have cast their ballots for what has been dubbed "the mother of all elections", one which could see the country's first change in administration in 60 years.

Polling began at 8am on Wednesday (May 9) at 8,253 polling stations, which closed at 5pm. There are around 15 million eligible voters.

Results will start trickling in from 9pm. But a fuller picture will be clear only after midnight.

In a live video address, former prime minister Mahathir Mohamad said he asked the Election Commission to look into giving voters who were still queueing at polling stations the right to vote after 5pm.

However, Election Commission chief Hashim Abdullah has ruled out a time extension.

"We will close at 5pm for those not in the voting room," he said in an interview with RTM1. Mr Hashim said this is because the 5pm closing time has been gazetted and votes cast past that time could be challenged in court to the detriment of certain parties.

He added that this was the reason the Election Commission advised people to go out to vote as early as possible.

Earlier on Wednesday, Tun Dr Mahathir, who is contesting in Langkawi, cast his vote at a polling centre in Anak Bukit, mainland Kedah.

The veteran politician is in a three-cornered fight to win the parliamentary seat of Langkawi against incumbent Barisan Nasional (BN) candidate Nawawi Ahmad and Parti Islam SeMalaysia's (PAS) Zubir Ahmad.

"I do not know how he's going to cheat but as far as I can see, the people are not supportive of Najib. Even his 10 goodies that he offered yesterday, nobody cares," he told reporters.

His former protege and now prime minister cast his vote at a polling centre in Pekan, Pahang.

In an interview on Channel TV1, Datuk Seri Najib described this election as calm but vicious due to personal attacks by the opposition.

This, said Mr Najib, does not reflect a mature democracy. "But what is important is for the people to decide on the future of the nation. This must be done based on facts, policies and those who can execute the best plans for the country," he said.

He slammed as "fake news" viral WhatsApp messages which alleged that several voters were given ballot papers without the Election Commission official stamp.

"They are so desperate to spread these accusations and lies, it is the same story but in different locations," Mr Najib said on his Facebook on Wednesday afternoon.

This newspaper's team of journalists on the ground reported long queues of voters at some polling stations when the polls opened at 8am.

Party leaders made last-ditch appeals to Malaysia's 15 million voters on Tuesday. While Mr Najib made an appearance on national television for the second evening in a row, his mentor-turned-nemesis Mahathir turned to streaming his final rally speech online.

Two pollsters on Tuesday found that neither side has been able to secure a comfortable lead after an intense 11-day campaign.

Leading opinion researcher Merdeka Center and think-tank Ilham Centre agreed that PH was in the lead on the peninsula, but said the opposition would need a last-minute surge of support to win the lion's share of seats, which are "too close to call", to overcome BN's expected sweep of East Malaysia.

"We found that Barisan Nasional presently retains a sizeable seat advantage. The high number of marginal seats implies that voter turnout will be a critical factor in determining the outcome of many seats on Election Day," said Merdeka Center. 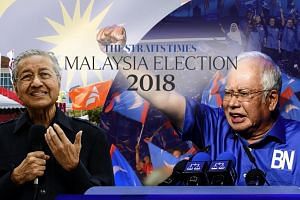 4 possible outcomes of Malaysia's election on May 9

In a speech televised live across several state and private stations, he vowed to waive income tax for those aged 26 or younger, and toll fares for all expressways for five days during next month's Hari Raya Aidilfitri celebrations, if BN were to be given a fresh mandate.

"I want all Malaysians to wake up to a happy Malaysia," the BN chief said in his hometown seat of Pekan, Pahang.

He also said that next Monday and Tuesday would be public holidays - or Sunday and Monday for states where the weekend begins on Friday - so Muslims can start the fasting month with their families.

In Langkawi, the island that Dr Mahathir developed into a tourism hub during his 22 years in power, the former premier insisted that Malaysia would have been a developed nation by 2020 were it not for Mr Najib's nine years at the helm. "Unfortunately, the government of the sixth prime minister has been a disaster," he said.

The opposition overcame its lack of airtime on mainstream media by broadcasting the 92-year-old's address on Facebook Live, and at rallies nationwide prior to the midnight close of the campaign.

Malaysia's 14th general election has become increasingly difficult to call in recent weeks, borne out by polling data suggesting that PH has gained on BN, despite earlier expectations that Mr Najib would cruise to victory with the Islamic PAS splitting the anti-BN vote.

Most observers expect the ruling coalition to lose the popular majority again, but due to the first-past-the-post system, it can still control Parliament and form the government after today's vote.

A version of this article appeared in the print edition of The Straits Times on May 09, 2018, with the headline 'Parties in close race as Malaysians go to polls today'. Subscribe
Topics:
More
Whatsapp Linkedin FB Messenger Telegram Reddit WeChat Pinterest Print Purchase Article Copy permalink