KUALA LUMPUR (THE STAR/ASIA NEWS NETWORK, BERNAMA) - The Malaysian Chinese Association (MCA), one of the ethnic component parties of the Barisan Nasional (BN) coalition, has said it accepts the general election results and respects the people's decision.

The party's president Liow Tiong Lai, who is also Transport Minister, said in a statement he urged all party members to stay united in the current political situation to face the challenge together.

Datuk Seri Liow lost in a three-cornered fight by a majority of 2,032 votes at Wednesday's (May 9) general election after four terms in charge of the Bentong parliamentary seat in Pahang.

The DAP is a member of the four-party Pakatan Harapan opposition alliance that contested under the PKR ticket at this year's election.

Liow said the MCA will hold a central committee meeting on Friday (May 11).

"We will review the result of GE14 and its implications, set the future direction of MCA and strive to consolidate our structure in order to march forward," he said. 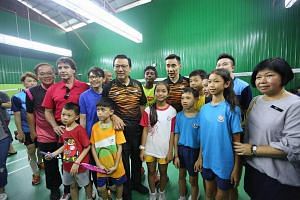 Liow also thanked voters for their support and the hard work of party cadres in the election.

Meanwhile the president of the BN's Malaysian Indian Congress, Dr S. Subramaniam, who lost the Segamat parliamentary seat after holding it for three terms said that he was considering returning to his medical practice either full or part time.

"Losing in politics is not the end of life, when something ends, there will always be a beginning," he told reporters.

"I was already thinking that this would be my last term, I didn't want to take politics into my 70s. So, after the results, it shows that my political career has ended earlier," Datuk Seri Subramaniam said.

Subramaniam on Wednesday failed to defend his Segamat fortress which he held since 2004, losing to PKR candidate R. Santhara Kumar with a vote-majority of 5,476. The three-cornered clash saw Subramaniam garnering 18,584 votes, against 24,060 votes for Santhara, and just 2,676 votes for PAS candidate Khairul Faizi Ahmad Kamil, who lost his deposit.

After the election results were announced, Dr Subramaniam entered his counting centre in Johor Baru to shake hands with Pakatan Harapan members and congratulated them, although he looked disheartened by the defeat.

He said voters did not cast votes based on his performance in the constituency, adding that the votes were cast mainly for political parties.

"If they cast votes based on performance (in Segamat), then rightfully they would have voted for me, but they saw things beyond performance," Subramaniam said.

Another of BN's ethnic minority parties, the Parti Gerakan Rakyat Malaysia (Gerakan), president Mah Siew Keong lost in the Teluk  Intan parliamentary seat in Perak to PKR candidate Nga Kor Ming, who is also the DAP president for the state.