Operation nets 12 Filipinos and a Malaysian with links to Philippine groups: Police chief

The Malaysian police said they have arrested 13 suspected militants, including six supporters of the Abu Sayyaf Group (ASG) who were involved in the deadly siege of Marawi town in the southern Philippines two years ago.

The detainees comprised 12 Filipinos and a Malaysian.

"They were detained for their suspected involvement in several terror groups... either the ASG, Maute combatants or the Royal Sulu Force (RSF)," said Tan Sri Fuzi, referring to militant groups based in the southern Philippines.

"Some of them were also involved in giving protection to foreign terrorist fighters who are hiding in Sabah."

The first arrests on March 11 in Semporna town in Sabah state, he said, involved five Filipinos and a Malaysian - all men aged between 40 and 60.

"Four of them are suspected to have been involved in the Marawi siege in 2017, together with the Maute group," he said. "They were also involved in giving protection to the Maute and several Middle Easterners who are hiding in Sabah."

They were detained for their suspected involvement in several terror groups... either the ASG, Maute combatants or the Royal Sulu Force... Some of them were also involved in giving protection to foreign terrorist fighters who are hiding in Sabah.

In the Marawi siege that lasted five months from May 23, 2017, more than 1,000 gunmen, including those from the Maute group, seized large parts of the town in Mindanao island in a bid to turn the city into a province of the Islamic State in Iraq and Syria (ISIS).

By the time the Philippine military declared victory, some 1,000 militants, government troops and civilians had been killed, half of Marawi was in ruins and about 400,000 people living in and near the city were displaced.

But some of the militants managed to slip away.

Mr Fuzi also said that two of these six men were also believed to be RSF members who were involved in the incursion of Sabah's Lahad Datu district in 2013.

"They're also involved in recruiting new members for the RSF by selling the group's membership cards among Filipinos who reside in Sabah," he said.

"Both suspects fled to the southern Philippines after the terror group was defeated (in Marawi). In November 2018, the duo managed to infiltrate Semporna in an attempt to activate the RSF in Sabah."

The 2013 bloody incursion of Lahad Datu by some 200 militants from the southern Philippines was inspired by a self-proclaimed Filipino sultan's claims of historical dominion between the Philippines' Sulu archipelago and the neighbouring Sabah state, which is part of Malaysia.

At least 70 people, mostly militants, were killed in the six weeks of fighting with the Malaysian armed forces. Most of the other militants slipped back to the southern Philippines. 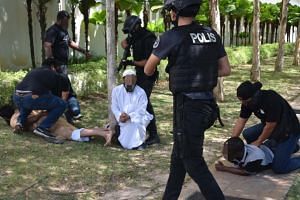 Timeline of crisis in Philippine southern city of Marawi

On March 11, too, the Malaysian authorities nabbed five men and a woman - all Filipinos between 23 and 63 years old - in Tambunan, Sabah.

One of them, who worked as a construction worker, is believed to have been involved in the Marawi siege. He had sneaked into Sabah last December, said Mr Fuzi.

"Meanwhile, the other five from the second arrests were nabbed for providing protection to several ASG and Maute members who are still at large."

The 13th person arrested was a 39-year-old Filipino in Tambunan, who provided protection to ASG and Maute members.

These arrests followed news last week that Malaysia had deported six Egyptians and a Tunisian national, claiming they were suspected Islamist militants who were involved in plans to launch large-scale attacks in several countries.

Mr Fuzi said last week that in the country's battle against militancy involving foreign nationals, Malaysia had uncovered a plan by foreign militants to use the country as a "safe haven" transit and logistics centre, following the collapse of ISIS in the Middle East.

He said the militants are adopting a new strategy by marrying local women to get spousal visas for long-term stay in Malaysia. They also aim to remain in the country by enrolling as teachers, students or by being involved in business.