KUALA LUMPUR (Bloomberg) - Malaysia's third push to build a national car brand may see it sourcing parts from its South-east Asian neighbours, as the region forges stronger ties to weather out the US-China trade tensions.

"What Mahathir meant was that he needed something where Malaysians can get together, Asean can get together, to supply components of this vehicle and make it into a national car in Asean, not only in Malaysia," said Mr Leiking.

"It's ambitious but I think that it's necessary now, more so when you want to create an economic bloc like Asean."

As a trade war between the United States and China deepens, the 10-country Association of South-east Asian Nations, or Asean, has benefited from its fallout as companies shift orders and move production bases to the region.

It was the top destination among the one-third of more than 430 American companies in China that considered moving operations elsewhere, according to a survey by AmCham China and AmCham Shanghai.

Toyota Motor, Tata Motors and Ford Motor already operate assembly plants in Thailand, the biggest car manufacturer in South-east Asia. The country seeks to ramp up production to 3.5 million units in 2020, an 80 per cent increase from 2016, and exports the vehicles to Australia, Japan, as well as Malaysia and Indonesia.

Malaysia stands to gain as a trans-shipment point, capitalising on its location by the Strait of Malacca - a historic channel connecting Asia's biggest economies from Japan and China to India and beyond.

Finance Minister Lim Guan Eng said the trade war will be positive for the country over the next year or so, especially in electronics and steel as the world's two biggest economies seek alternatives for supplies.

The government is gathering views from the industry on developing the new car brand, and will let the project be driven and funded by the private sector, Mr Leiking said. The government will assist in licensing and facilitation, he said.

Tun Dr Mahathir revived his vision of a home-grown car brand just a month into his premiership. He started automaker Proton Holdings in the 1980s during his previous tenure, but the brand was later privatised and almost half the stake sold to China's Zhejiang Geely Holding Group. A second effort was made in the 1990s with Perusahaan Otomobil Kedua Sendirian, also known as Perodua. 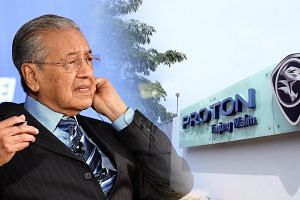 This time, however, the new car will compete in a market beyond Malaysia, Mr Leiking said.

"Proton has already achieved what they've wanted and they're there," he said.

A successful carmaker could help boost the nation's exports, which relies on commodities such as crude and palm oil, as well as electronics.

Shipments declined 0.3 per cent in August from a year ago, falling far short of economist estimates for an 8 per cent increase. That narrowed the trade surplus to RM1.6 billion (US$385 million), from RM8.3 billion in July.

Malaysia had taken into account the possible knock-on effects that global trade tensions may have on the supply chain.

The government has engaged with representatives from the US on the matter and was banking on the world's two largest economies remaining rational.

"Eventually America and the Chinese will come to an understanding, and I pray that they do," Mr Leiking said.

"What else can we do other than advise them and pray? I have faith that they will come to their senses."