KUALA LUMPUR (REUTERS) - Malaysia is considering asking the US Department of Justice (DOJ) to get Goldman Sachs to return nearly US$600 million (S$802 million) in fees it earned from bonds raised for scandal-tainted 1Malaysia Development Berhad (1MDB), two sources familiar with the matter said on Friday (June 8).

Malaysian authorities want to ask the DOJ, which is pursuing a corruption and money laundering probe at 1MDB, a state fund, to get Goldman to disgorge profits it made from the sale, after which Malaysia would claim the money, both sources said.

No formal request has been made to the DOJ, but top officials are actively discussing the plan within the government, the sources added.

"There have been no official requests yet, but this is being discussed," said a Malaysian government source.

A financial industry source in Malaysia, who is aware of the discussions, said back channel talks between the government and the DOJ were underway.

How Kuala Lumpur would go about claiming the funds, and the legal hurdles in the process were not immediately made clear by the sources.

A spokesman for Finance Minister Lim Guan Eng said the minister had no comment on the matter. A spokesman for Goldman Sachs declined to comment and the DOJ was not available outside US business hours. 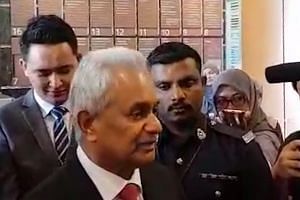 The US Embassy in Kuala Lumpur did not immediately respond to a request for comment.

A third source familiar with the matter has said Malaysia is also preparing an arrest warrant for Roger Ng, a former Goldman banker.

Goldman raised nearly US$6.5 billion in three bond sales between 2012 and 2013 for 1MDB, a state fund founded by former prime minister Najib Razak, who was ousted in a general election last month.

The US bank earned almost US$600 million for the three deals - an amount critics say is far in excess of the normal 1-2 per cent fees a bank could expect for helping sell bonds.

More than US$2.5 billion raised from those bonds was misappropriated by high-level 1MDB officials, their relatives and associates, according to DOJ civil lawsuits filed in a US court in 2016.

Datuk Seri Najib has denied any wrongdoing, but has been questioned by government investigators after the election. He and his wife have been barred from leaving the country.

Goldman has always maintained that it did nothing wrong and that it had no visibility into whether some of the funds raised may have been subsequently diverted to other purposes.

Malaysia's newly elected government led by 92-year-old Prime Minister Mahathir Mohamad has vowed to bring back the billions allegedly lost through 1MDB, and prosecute the culprits.

A special task force set up after the election to look into 1MDB met officials from the DOJ and the US Federal Bureau of Investigation to discuss the probe in late May, including the process of returning the funds to Malaysia.