If approved by lawmakers, capital punishment will be replaced with minimum 30 years in jail

Malaysia's de facto Law Minister Liew Vui Keong told Parliament yesterday that the Cabinet has agreed to scrap the death penalty, including for murder, but Deputy Prime Minister Wan Azizah Wan Ismail appeared to hedge over the matter by telling reporters that the government would review abolishing it for murder.

But when The Straits Times contacted Datuk Liew again, he insisted that "all 32 death penalty offences found in eight of our laws" would be abolished.

Mr Liew earlier told Parliament that the decision, reached collectively by Cabinet, covered Section 302 of the Penal Code, which pertains to murder; the Firearms (Heavier Penalties) Act, 1971; the Firearms Act, 1960; the Kidnapping Act, 1961; and the Armed Forces Act, 1972.

Death penalties provided for under the Water Services Industries Act, 2006; the Strategic Trade Act, 2010; and the Dangerous Drugs Act, 1952, are also to be abolished.

"Following the Cabinet decision, a Cabinet memorandum has been circulated to the relevant ministries for their comments and to get public feedback on it," Mr Liew said during a question-and-answer session in Parliament.

If approved by Parliament, capital punishment will be replaced with a minimum of 30 years in jail.

The planned move has been controversial in conservative Malaysia, with an online poll last month showing 82 per cent of 22,000 netizens opposing it. 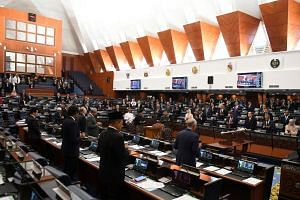 Debate over the issue heated up over the last few days following the death of a nine-month-old baby who was physically and sexually abused while in the care of a babysitter.

"I have always been an advocate of the abolishment of the death penalty, but cases like these, I think, justify retaining the said death penalty in exceptional cases, especially gruesome murders, provided the evidence against such offenders is beyond any reasonable doubt," he was quoted as saying.

As of last month, there were 1,279 prisoners on death row, of whom 932 were convicted of drug trafficking, 317 of murder, 13 of illegal possession of guns and five of kidnappings. Nine people were convicted of treason while two others were involved in collective robberies and murders, according to Deputy Defence Minister Liew Chin Tong. One person was charged under the now-repealed Internal Security Act, he added.

The campaign to abolish the death penalty has been around since 2012, when the previous Barisan Nasional (BN) government was in office. Parties in the long-ruling BN are now in the opposition after the coalition lost the general election in May and was replaced by the Pakatan Harapan alliance.

Non-governmental organisations have called on the current opposition to support the plan to abolish the death penalty.

National Human Rights Society president Gurdial Singh Nijar said recently: "A death penalty is irreversible. There have been cases where the wrong people have been sentenced to death for a variety of reasons - including poor quality of defence. Thus, innocent lives are put at risk."

He acknowledged that families of murder victims suffered a great sense of loss and were traumatised, but stressed that an execution did not help them heal nor did it end their pain.

"Perhaps there are other ways the state can help such families, especially those of murder victims - such as the provision of funds now being used for the costly process of executions," he said.

But DAP lawmaker Ramkarpal Singh on Sunday countered that the concerns of the families of murder victims should be taken into account, saying that abolishing the death penalty may send the wrong signal that such crimes are not taken seriously enough.

"We cannot ignore such concerns," he said.