SINGAPORE - After days of persistant haze, Malaysia was to begin cloud seeding operations at noon on Tuesday (Sept15).

In Indonesia, a state of emergency was declared in Riau province on Monday, and aircraft have been deployed to water-bomb the fires, and conduct "cloud seeding" to induce rain.

Here's how cloud seeding is done: 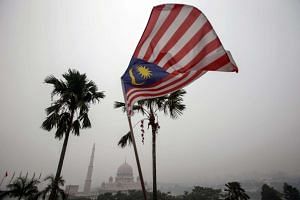 Cloud seeding is the induction of rain by introducing chemicals into clouds.

Silver iodide or dry ice is dispersed into the clouds, and provide nuclei for moisture to condense around.

Water in the clouds is supercooled to ice when it bonds with the silver iodide, which has a similar crystalline structure to ice.

When too heavy to remain suspended, the ice crystals fall, and melt on the way to become rain.

The silver iodide or dry ice can be delivered by:

Flares mounted on airplane wings spray the chemicals across clouds

Rockets are launched into the clouds and release the chemicals

Silver iodide is sprayed into a propane flame, which is then transported by the heat and wind