MELBOURNE  - A Sri Lankan man charged over a mid-air bomb scare aboard a Malaysia Airlines flight chose not to appear in the Melbourne Magistrates court where he was charged with federal criminal offences that carry a 10-year jail term, reported The Australian.

Manodh Marks, 25, has been charged with attempting to enter the cockpit of flight MH128 from Melbourne to Kuala Lumpur and threatening to detonate an explosive device.

The man, who has been living in Australia on a student visa, has requested medical attention and asked for special treatment while in custody. His lawyer said he was in a “vulnerable” state.

Asked by Magistrate Susie Cameron as to the reason for his vulnerability, Mark’s lawyer said: “He has concerns for his safety in custody... He needs to see a mental health nurse urgently."

Police revealed earlier that Marks had just been released from a mental health facility before booking a flight on the plane.

“He had been released from psychiatric care (on Wednesday), and from there we believe he has purchased a ticket on this plane... and then got out to the airport and on that plane,” Victoria state police chief Graham Ashton told reporters.

Those on board the flight  said they feared for their lives when the man rushed towards the cockpit shouting that he wanted to “blow the plane up”, reported Agence France-Presse. 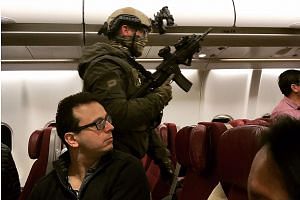 Several passengers wrestled him to the floor and tied him up before the plane made an emergency landing at Melbourne airport. Armed officers from an elite police unit boarded the flight, handcuffing the man and escorting him off the plane. Photographs on national media showed black-clad officers carrying rifles in the cabin.

The suspect, who lived in the Melbourne suburb of Dandenong and was studying to be a chef, was actually carrying a bluetooth speaker slightly larger than an iPhone, Ashton said.

He added that the incident was no longer being treated as possibly linked to terrorism, but instead a “case involving a mental health issue”.

Malaysian Deputy Transport Minister Abdul Aziz Kaprawi earlier told AFP the incident was “not a hijack” but involved “one disruptive passenger (who) tried to enter the plane’s cockpit”.

Flight MH128 left Melbourne at 11:11pm (1311 GMT) on Wednesday but turned back shortly afterwards when the man allegedly threatened those on board.

“It is alleged that a man tried to enter the cockpit and threatened the safety of passengers and staff,” Victoria state police said in a statement, but added that he “did not gain entry to the cockpit” and was subdued.

While officials tried to play down the incident, passengers told of some 90 minutes of onboard drama and fear after take-off.

A business class passenger, who identified himself as Andy, told Melbourne radio station 3AW that the arrested man had threatened to “blow the plane up”.

Andy said the man ran to the back of the plane, where two other men grabbed and disarmed him of a “giant black thing” and “put hog ties on him”.

Superintendent Langdon described the experience for passengers as “very traumatic”, adding passengers and crew were “heroic”.

Passenger Arif Chaudery said he joined several others to subdue the man. “Families, kids, they were very scared, and some screaming... so three or four guys, we jumped as quickly as possible,” he told Channel Nine.

“We just put him on the floor and finally staff brought the belt, so we handcuffed him and tied his legs and put his face on the floor.”

Got this on Watsapp. Glad everyone is safe. #mh128 #mas #Australia #airtravel pic.twitter.com/EW3uWvVsB2

Malaysia Airlines flight #MH128 has returned to Melbourne after a passenger tried to enter the cockpit shortly claiming he has explosives. pic.twitter.com/6PPTLgW1Qd

Other passengers subdued the attacker and an overweight landing was performed on RWY16. The aircraft is isolated at taxiway 'K'. https://t.co/OrTNUmaBoG

✈️ All flights to and from @Melair have been suspended due to a security incident. Passengers are advised to check with their airline.

Malaysia Airlines said the plane’s passengers would be put up at hotels and offered another flight.

Melbourne airport said inbound and outbound flights had been affected and advised passengers to check with their airlines.

Because of the security incident on flight #MH128 flights bound for Melbourne Airport are now diverting to other airports. pic.twitter.com/dE3Xxuogyx

The incident came just months after Canberra called off the search for missing flight MH370 carrying 239 passengers and crew, after a vast underwater hunt off Australia’s west coast failed to find the plane.

MH370 disappeared in March 2014, while another passenger jet, MH17, was shot down in July of the same year while flying over Ukraine in twin tragedies to hit Malaysia’s national carrier.