JAKARTA - The majority has spoken in choosing a new governor for Indonesia's capital who is almost the complete opposite of the incumbent Basuki Tjahaja Purnama, better known by his Hakka nickname Ahok.

On Wednesday (April 19), Basuki lost at the polls to his Muslim rival, former culture and education minister Anies Baswedan, in a bitter campaign fraught with sectarian strife.

It has been a dramatic fall from power for Basuki, who went from virtual shoo-in for the election last September, to being possibly out of work come this October.

Over the last six months, he has been at risk not just of losing his job but even his life after some Muslim hardliners threatened to kill him for allegedly insulting Islam (Indonesian police had even foiled an assassination attempt on his life by a local militant loyal to the Islamic State in Iraq and Syria).

But Basuki, who is not just Chinese but also Christian, took Wednesday's defeat well. 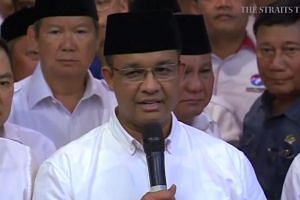 After the final quick count of the votes were in and his fate clear, he told reporters gathered at a hotel in downtown Jakarta, "The Lord giveth, and the Lord taketh away," quoting part of a Bible verse from the Book of Job.

His supporters there, mostly educated, mid-upper class folks, however, were visibly disappointed. Some were so distraught that they were on the verge of tears, shocked that their charismatic leader had lost.

Opinion polls and voter surveys just days ago had shown that Basuki was trailing his rival by less than one percentage point - a hair's breath in any political election.

But what seemed to be in his favour was a downtrend in Mr Anies' popularity, while his numbers were on a steady rise from last December when he took a hit after being charged in court for blasphemy.

The writing was on the wall, but perhaps many choose to ignore it, in hope that their desire for pluralism would trump the rising tide of sectarianism in Jakarta over the last year.

There was also hope that he could make history as the first non-Muslim to be directly elected governor of Indonesia's capital.

Political observers said the quick count results of Wednesday's election, which saw Mr Anies edge Basuki out at the polls, reaffirms the growing influence of Islam in Indonesian politics.

Indeed Basuki's rivals have capitalised on the blasphemy scandal and often played the religion card to score votes against him, leading many to view the election as a test of Indonesia's national ideology of Bhinneka Tunggal Ika, which means "unity in diversity".

The contest has also been touted as an ideological war, which began recently with the struggle between the reformists and the entrenched interest groups in the country, said ISEAS - Yusof Ishak Institute visiting senior fellow Leo Suryadinata.

The reformists are President Joko Widodo and Basuki, while the entrenched interests refer to the likes of retired army general Prabowo Subianto, who backed Mr Anies' run for governor.

"Anies represents the entrenched interest group," Professor Suryadinata said. "So if Anies wins, that would be a step back for Jakarta."

Others, who agree, said the anticlimactic finish to what has been a long-drawn neck-and-neck race to City Hall is also a defeat for pluralism in Indonesia. These entrenched interests seemed to have succeeded in using sectarianism to push out not just a double-minority politician but also an effective reformist, they noted.

"An objective comparison of the proposed programmes by Ahok and Anies during the campaign, would show that Ahok is the more logical choice, but voters were not moved by it," said Mr Muradi from Padjadjaran University, referring to Basuki's performance after taking over from Mr Joko as governor in 2014.

A survey released just last week by pollster Saiful Mujani Research and Consulting, had found that while 76 per cent of respondents were satisfied with his work as governor, half said they would not vote for him atWednesday's polls.

Mr Muradi believes that it all boils down to Basuki not being Muslim and warned that Wednesday's polls may have a "domino effect" on future elections.

He said, "If you can win by playing up religion in Jakarta, you can do it anywhere else in Indonesia."