No racial or religious element in violence linked to relocation of temple, he says; 21 people held

Blaming criminal elements for the violence at a Hindu temple on Monday, Malaysian Prime Minister Mahathir Mohamad has issued a stern warning against perpetrators of the incident.

"The criminals who tried to create disturbances and injured our security and rescue personnel, as well as damaged public property, will face stern action according to the law," Tun Dr Mahathir said in a statement yesterday.

"And if there are puppet masters behind these incidents, they too will not escape from receiving appropriate punishment," he added.

He also said there was no racial or religious element in the incident, although it was linked to the relocation of the Sri Maha Mariamman Temple in Subang Jaya, about 40 minutes away from downtown Kuala Lumpur.

Devotees have stationed themselves in the compound of the temple since Monday, when the temple management said unidentified thugs had tried to evict them from the place of worship.

Police have arrested a total of 21 people related to the violence, including three employees of the developer. A court remand order was issued yesterday evening against 16 individuals.

Early yesterday morning, a mob attacked the office of the property developer, One City Development, in what appeared to be retaliation for Monday's incident.

The second bout of violence early yesterday morning also saw rioters attacking firefighters and ambulance personnel as well as their vehicles. One firefighter was critically injured and is now on life support. Several others who were injured in Monday's fracas are also in intensive care.

Twenty-three vehicles were torched during the incidents, and a building was also damaged. 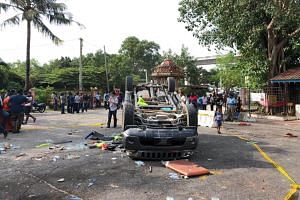 Police chief Mohamad Fuzi Harun has, in the meantime, advised people against gathering in large crowds in the area, but said that the authorities cannot stop worshippers from entering the temple premises.

"I have advised not to gather but if they want to perform prayers or visit a place of worship, we cannot stop them," Tan Sri Fuzi told reporters, referring to the devotees.

Mr Fuzi added that the police refrained from using water cannon and tear gas against the rioters because it was a place of worship.

"If we did that, we will invite (retaliation) and what not. We must act according to the situation at hand," he said.

A 2014 court settlement reached between the temple management and One City Development promised relocation and monetary compensation for the construction of a new temple.

However, devotees have been adamant that the temple should remain on its current site.

So far, more than 700 police personnel, including some from the Federal Reserve Unit and other divisions, have been deployed to the scene to maintain order.

Minister in the Prime Minister's Department P. Waytha Moorthy, who is in charge of national unity and social well-being, has urged the Malaysian Indian community to be calm and rational, saying that some unscrupulous people were taking advantage of the situation and further complicating the matter by inciting social unrest.