He says he has proof project would cost $37b, after former minister disputes higher figure

KUALA LUMPUR - Prime Minister Mahathir Mohamad said on Tuesday (May 29) that Singapore will be informed about Malaysia's wish to scrap the high-speed rail (HSR) project.

He also said that he stood by earlier comments that the project would cost a total of RM110 billion (S$37.2 billion), after a former Malaysian minister who was in charge of the project said on Tuesday that estimates had put the cost at RM50 billion to RM70 billion.

Tun Dr Mahathir was met by reporters at a breaking-of-fast event in Kuala Lumpur on Tuesday.

He had told the media on Monday that the HSR would be scrapped as the new government seeks to trim its RM1 trillion debts.

Asked on Tuesday whether Singapore had been informed, he replied: "No, I made a statement with the press (on Monday), but they will be informed."

The HSR deal, inked by the previous administration in December 2016, would see the 350km line slash travelling time between Singapore and Kuala Lumpur to 90 minutes when completed in 2026.

Most of the line - 335km of it - would be in Malaysia, with 15km in Singapore. There would be eight stations - seven in Malaysia and one in Jurong East.

Asked for a response on Monday about Malaysia's move, a spokesman for Singapore's Ministry of Transport said: "Singapore has not yet received any official notification from Malaysia. We had agreed to proceed with the HSR project based on mutual benefits and obligations set out in the HSR bilateral agreement.

"We will wait for official communication from Malaysia." 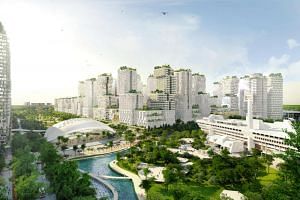 Datuk Seri Abdul Rahman Dahlan, who was the minister overseeing the HSR in the previous administration under Datuk Seri Najib Razak, in a statement disputed the RM110 billion project cost mentioned by Dr Mahathir.

"The Pakatan Harapan government says the HSR's RM110 billion price tag is the main reason the project must be cancelled. How did they arrive at this figure? This differs greatly from the range of RM50 billion to RM70 billion that the governments of Singapore and Malaysia had budgeted earlier this year," he wrote.

Dr Mahathir said in response: "When we said the country's debt is at RM1 trillion, we have the documents to back it. He's (Rahman) saying the estimated cost is between RM50 billion and RM70 billion. So show us the proof... we have the papers (documents)."

Mr Abdul Rahman, who was minister in the Prime Minister's Department (Economic Planning Unit), in his statement said cancelling the project is a "short-sighted" move by the new government.

Dr Mahathir said on Monday that Malaysia might have to pay a penalty of 500 million for cancelling the project, but he was unsure if this was in ringgit or Singapore dollars.

At the 8th Singapore-Malaysia Leaders' Retreat in January this year between Prime Minister Lee Hsien Loong and then Prime Minister Najib, they were asked how the two countries would ensure projects such as the HSR will be unaffected by political changes, as these projects could span several terms of government.

PM Lee said then that there is a "binding agreement" that must be abided by "whoever is the government on either side".

"If the subsequent government has other ideas, well, that would have to be dealt with and the agreement will deal with these contingencies. But I have no doubt on Singapore's side, we have every intention of implementing what we signed and committed to today," Mr Lee added.

A version of this article appeared in the print edition of The Straits Times on May 30, 2018, with the headline 'Mahathir: S'pore will be told of KL's wish to scrap HSR'. Subscribe
Topics:
More
Whatsapp Linkedin FB Messenger Telegram Reddit WeChat Pinterest Print Purchase Article Copy permalink