"They won't join any (parties) because they were our members… But, if we are legal, we will claim they are ours," he told reporters at a press conference in his office at Yayasan al-Bukhary on Friday (April 6).

The former prime minister said Pribumi members would instead contest as independent candidates in the coming polls, under a common logo used by Pakatan Harapan.

"If they say we are illegal, then we can't say we are from Pribumi. But the 52 seats still belong to us - not Pribumi, but the group that was formerly Pribumi," he said.

Speculation is rife that component parties under Pakatan will use the PKR logo in the 14th General Election as the Opposition alliance has yet to receive approval from the Registrar of Societies (RoS) to register as a formal coalition.

The decision on a common logo will be announced at an opposition event in Pasir Gudang, Johor on Saturday. 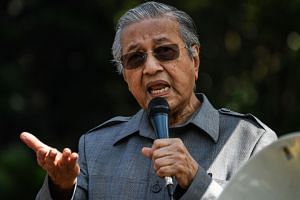 Mahathir defies ban, says party will continue to use name and logo for campaigning

Mahathir: Next elections a do or die for Malaysia's future

"If there are any parties which allow us to contest under their names, we will do so as independent candidates," he said.

On Thursday, the RoS ordered PPBM to temporarily disband for 30 days as it had failed to fulfil the body's Feb 28 notice requesting for documents and details on the party.

This means that Pribumi will not be allowed to use its logo or conduct any party activities during its disbandment with immediate effect.

Pribumi now has 30 days to fulfil the RoS' request for more documents and file an appeal, failing which the party will be permanently de-registered.

The exact nomination and polling dates will be decided by the Election Commission and announced later.

The general election must be held within 60 days of Parliament's dissolution.