Unlike in 2008, Mahathir's party influence is waning; Najib also has support of the leadership

When Tun Dr Mahathir Mohamad resigned from Umno in 2008, the party reacted by giving him what he wanted - kicking out Tun Abdullah Badawi, who was his own handpicked successor.

The episode underlined the huge influence Malaysia's longest-serving premier still wielded over the party then. He had stepped down in 2003 after leading Malaysia for 22 years.

Mr Abdullah was forced to leave in April 2009 by his own party chiefs, who had seen the Umno-led Barisan Nasional (BN) lose two-thirds of Parliament for the first time in the 2008 General Election. 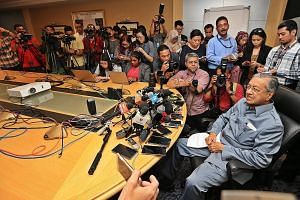 This time around, things are different. Datuk Seri Najib Razak, though besieged from many directions, enjoys widespread support among the party's leadership.

For good measure, he replaced the Attorney-General and chief of the Special Branch intelligence section.

Last week, the 62-year-old Mr Najib got Tan Sri Muhyiddin suspended from his post of deputy Umno president. And again, there were few ripples in the 3.3 million-strong party.

"Nobody cares about his quitting Umno. Najib is no Abdullah and will cling onto power with all possible means," senior fellow at the S. Rajaratnam School of International Studies Oh Ei Sun told The Straits Times.

By resigning from Umno again yesterday, Dr Mahathir, 90, is playing chicken with Malaysia's biggest political party. He is asking the party if it is ready to face an increasingly angsty electorate without his endorsement.

But Mr Najib has shown that he does not flinch easily.

On the flip side, Dr Mahathir's influence in Umno is waning. The rebellion also comes at a time when party elders want to band together after seeing in 2008 that infighting at the top only weakens the party.

"This is probably the last straw in Mahathir's hands. I doubt his resignation from Umno will have impact unless he is able to trigger even more resignations from other Umno leaders. If this remains a lone protest, it will not make any difference," said Mr Wan Saiful Wan Jan, chief of think-tank Ideas.

Housing and Local Government Minister Abdul Rahman Dahlan was even more direct. He noted that when Dr Mahathir made a surprise announcement about resigning from all his posts in 2002, "many Umno members cried". "But this time around, tears no more!

"As a party with more than three million members and an entrenched organisation, Umno will survive any attempt to destabilise it, including resignations," he wrote in several tweets yesterday.

Dr Mahathir himself seems to recognise his waning power, saying he wants to see a "core group" of leaders declare and act on their commitment to topple Mr Najib. He did not say who they were.

His ally and former law minister Zaid Ibrahim has spoken of a March 27 gathering among like-minded personalities to seek a viable strategy to achieve this aim.

Perhaps the most significant takeaway from Dr Mahathir's press conference yesterday was not so much his resignation, but that he finally abandoned his insistence that removing Mr Najib - or Mr Abdullah previously - is all that is needed to reform Umno. "The party should be voted out of power but the opposition has got no majority, so we cannot do it," he said.

Malaysia's opposition is currently fractured following last year's break-up of Pakatan Rakyat, which gained the popular vote in 2013 but could not take parliamentary majority.